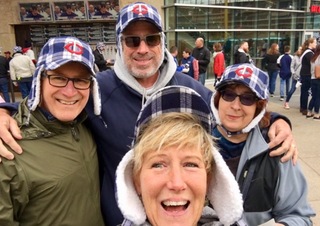 That's family friend Paul, my brother & sister-in-law, & me at Target Field in Minneapolis. The undomed Twins ballpark is great but it sure can be cold in April. These hats with fleece flaps were a godsend that day & I've been wearing mine ever since. I was coming out of the grocery story the other day when one of the delivery guys barked, Hey Twins! I whirled around & we had one of those classic baseball conversations rattling off games, players, alliances. He likes Jeter because his son was born Derek's rookie year. He too has no truck with the Mets. 5 minutes & we're best friends. Then I did it. Why I felt I had to be honest, I don't know, but I said, "I just want to say that I don't hate the Red Sox. I lived in Maine for 3 years so I couldn't." He looked at me, as I knew he would & said, Oh we were getting along so well but this tears it. Still in fun, still with the enjoyment of meeting a fellow fan & whipping through the shorthand of baseball history & pleasures, but now I was not quite kosher. Then he had to go back to work.