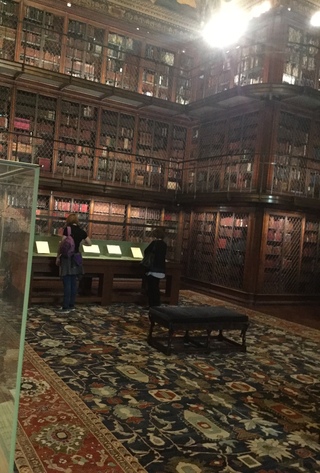 J.P. Morgan didn't read any of the 200,000 books he owned, but they are all available now to researchers.
What's the difference between a collector & a hoarder?

Money means you can buy better things & a place to store your treasures.

Well, I guess collectors hoard stuff people are interested in, while hoarders collect stuff that no one else would ever want. 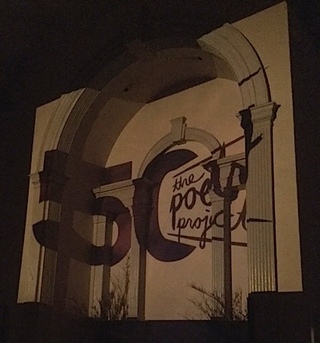 What a wonderful night. Flowers, food, atmosphere—all fantastic. We raised $100,000 to sustain the Project in the lean times ahead.

I never appreciated more how tireless Anne has been on behalf of poetry. Many poets are tireless on behalf of themselves (& their pet issues, maybe), but she has done the hard organizing work, without complaint.

Rosemary Carroll & I  Read More
Be the first to comment

Brooklyn is for Virginia 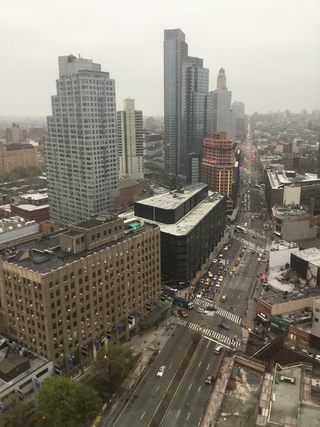 The view from Kathleen's new apartment.
Wonderful night: First a stop at my friend's 33rd-floor apartment with a wonderful view of Brooklyn. A new building, with no crazy electric boxes randomly nailed to the wall. (OK, I'll get over my ridiculous landlord's cheapo projects one of these days.)

Then we went to a fundraiser for Chris Hurst, a candidate for the Virginia House of Delegates, who was very impressive in his passion & his speaking (a former broadcast journalist).

I even won a "Virginia is for lovers" t-shirt, although naturally I was hoping for the grand prize of a weekend at an estate in the Blue Ridge Mountains.  Read More
Be the first to comment

Tags: The Economist
I feel like the best thing I have done in six months is subscribe to The Economist. Sober, well-written, fair-minded, and if there's an agenda, they make it clear: You know where they stand. Whatever they write about ends up fascinating me, even the abstruse financial stuff that I skip in every other publication.  Read More
Be the first to comment 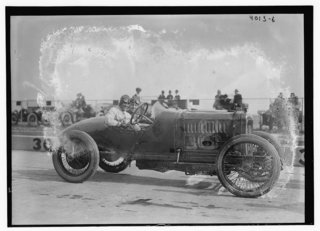 Not Sinclair Lewis but same era, same good looks.
Being the car guy that I am, or was, I'm surprised that I had never heard about Sinclair Lewis's early novel Free Air, (1919) "one of the very first novels about an automobile-powered road trip across the United States," according to an article in The Public Domain Review.

As I'm sure you know, Lewis (1885–1951) is enjoying new popularity lately, thanks to his 1935 novel It Can’t Happen Here, about an authoritarian American president. And I'm sure everyone has read, seen the movie, or knows about Main Street, Elmer Gantry, Arrowsmith, and Babbitt, and that he won a Nobel & a Pulitzer. But that he was an early adopter of the automobile was new to me. He also wrote about pilots & aviation, and traveled widely. His appreciation of big city  Read More
Be the first to comment

Tags: The House
I always like to arrive at this date, because on April 24, 1971, my friend Beth & I hitchhiked down to D.C. for the last big anti–Vietnam War demonstration. She woke up smiling on the lawn in front of the Lincoln Memorial, the young man who happened to be sleeping next to her fell in love, & thus we fell in with The House, which has been my tribe and lodestone for 46 years now.

I've written about The House so much, today it's just a tip of the protest sign to these men & women I love & always will.  Read More
Be the first to comment

Johnny and I have begun our summer read: Alphabet, by the Danish poet Inger Christensen (1935–2009) (trans. Susanna Nied). It's based on the Fibonacci sequence, although I can't quite see it. It's intensely lyrical & intensely fierce—not often a poet can do that simultaneously. Also, a kind of heavy yet lilting Anglo-Saxon alliteration pulls it together.  Read More
Be the first to comment

Among the Romans a white stone marked a joyful day

All I can think about is snow

And titles for my book about snow

Which is a lot shorter than I expected

Now that I've shoveled away all the technical excess

And made a nice clean path 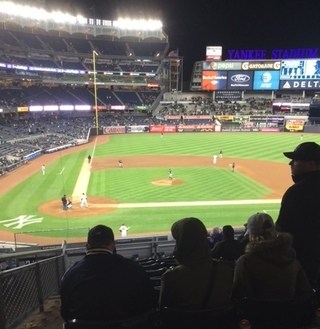 Went to the Mariners vs Rangers game a week ago. Mariners won. All was right with the world. God I love baseball. 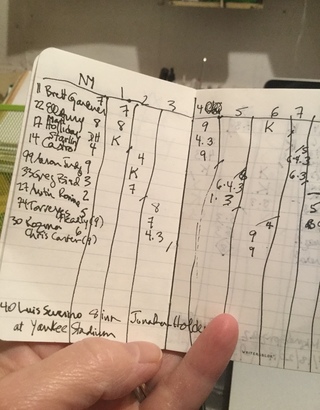 Staggered through the last of Passover & am happily eating chametz again.

Ended the holiday at a baseball game. Yankee stadium opened on this date (April 18) in 1923. This was the "new" Yankee stadium we were at, of course. A crisp 2-hour game against the ChiSox that ended their 8-game winning streak. A chilly 50°. I thought I wouldn't bother keeping score but once they started with the lineup I quick drew a card in my little notebook. It's how I watch a game. I used to draw scorecards on scrap paper on the way to the ballpark before someone gave me a fancy wire-bound scorebook.

All baseball is the same game & not like anything else ever. That's what's so great about it. Read More
Be the first to comment

I never wear shoes without socks NO NO NO

I own two pairs of Naot Miros, in different colors. The identical match I wouldn't wear without socks.

Eileen always seemed like the only person who could wear shoes without socks, Boston Irish that she is.

I can't say more about shoes because it may force me to think about feet.  Read More
Be the first to comment

* Quit college, after which I had to live by my wits not just trudge along in a path that was laid out for me.

400 pages in 10 lines, compleat, a memoir, non-chronology makes it come alive from all dimensions at once. An award-winning obit. And all that's not there, the life-map from birthplace to Pound, the geography of travels since, and the non-essential essentials, jobs and such. The space-between-the-notes concept at its absolute edge. Et, en passant, quelle vie. A wonderful life.

Thank you, Dan! You see what I was doing & what I didn't even know I was doing. How wonderful you are. — Elinor 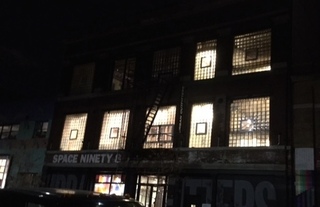 I can't really think of away to connect this photo, randomly taken because I liked the glass, with the day—warm weather, first seder tonight, finishing bits of work, cleaning up the space around me, reading Greggo's wonderful new book of old journals, feeling unexhausted for the first time in a week......
Be the first to comment 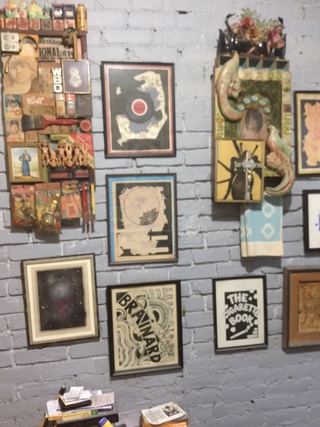 I love my little home because of all the art. It's Johnny's for the most part, although I suppose that makes it ours. He bought a work Joe made in 1962, which has to be one of the earliest in his oeuvre, doesn't it?

God, it makes me love Johnny so much.

Although if I'd been his wife with two little kids & he spent some windfall on art, I might have not been so happy. Or maybe I would have been. I was never anybody's mother so I never had to think unselfishly into the future.  Read More
Be the first to comment

The Fate of the Furious!

Cars on ice! Does it get any better than this?
This is what I want to see!

The poster (seen in the subway) reminds me of how much I liked Season 1 of Ice Road Truckers. But these guys drive even faster & crazier, I bet.

Thinking about World War I 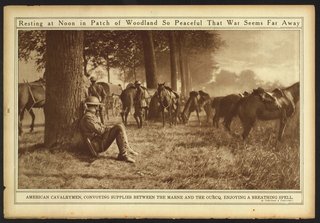 "Resting at noon in patch of woodland so peaceful that war seems far away."
100 years ago today, the United States entered World War I. It was also my English grandmother's 32nd birthday. Was it a date she remembered her whole life? I think about WWI a lot but not from an American pov. All of my grandparents—two English, two German—were involved, & my dad (born 1906) was a child in Berlin. Grandpa Jack was gassed & died at 50. Somehow it's the only war that I feel a connection to—long enough ago that any sadness is pleasant self-indulgence.  Read More
Be the first to comment 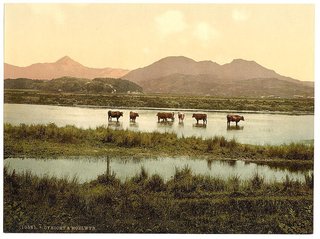 Just finished Judy Blunt's ferocious memoir, Breaking Clean, about growing up on a ranch in eastern Montana. Although she was born in 1954, you might well have thought it was 50 or a hundred years earlier. There was a grim Victorian assumption that the individual was sacrificed to the family and that women couldn't inherit or run things. No wonder she fled—even though she was 3rd or 4th generation there & loved the land. It sounds idyllic, doesn't it, riding horses, cutting cattle—but when you know none of it can really ever belong to you, you too would flee, I think.  Read More
2 Comments

Read this book myself a few years ago and loved it. Still a favorite

Thanks for letting me know! What else are you reading that you recommend?

I was looking for an old blog post, which I'd forgotten to tag, so I've been scanning previous months. And I suddenly see that June of 2016 isn't there at all in my archives. Where is it? Of course I can't remember what I wrote about so I can't search but I know I wrote throughout that month, as I have for almost 4 years now, with few skips.  Read More
Be the first to comment

It really is spring 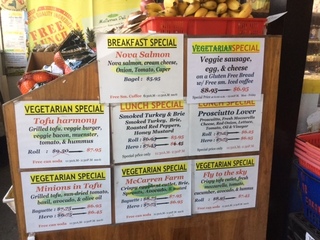 Tofu harmony, Fly to the sky, Minions in tofu...
I'd forgotten how nice it is to wander around, sit outside & read, look for quirky New York sights....
Be the first to comment
Loading…}