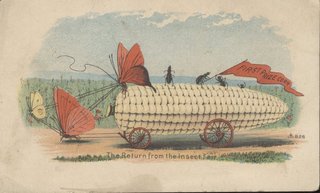 "The return from the Insect Fair."
I'm from a corn-growing state, home of the Corn Palace, and I'm a sucker for everything corn. Eating it: goes without saying. Knickknacks of every sort: bring 'em on. Puns? 'fraid so. 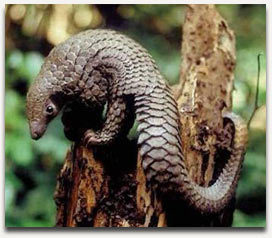 Save the pangolin.
I had never even heard of these animals, mammals also called scaly anteaters. There are 4 Asian & 4 African species, and they are highly endangered due to poaching. They are considered a delicacy by people in China & other parts of Asia, and the scales (which are nothing more than keratin, like our nails) are used in potions. One variety runs on its hind legs like tiny T Rexes. They are adorable and it is disgusting that tens of thousands are being killed, like the ortolans in France, for human ego. Also, the ecology of the areas where they live will change for the worse without enough of these animals, which control the ant and termite populations.  Read More
2 Comments

I see you have been reading the news from Washington.

I think I saw this in Mental Floss. Not that my sources aren't a closely held secret :-)

Some of us.
Man, I just love my cousins! I like them too. There were close to 50 of us—from NY, California, Seattle, Florida, & Minnesota—together in St Paul this weekend for my niece Rachel's wedding. How'd we get so lucky? No drunks, no pills, & we all have similar kind-hearted politics. One cousin-trait-in-common is that we all  Read More
Be the first to comment 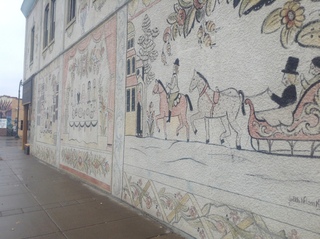 The wall of Ingebretsen's Scandinavian store in Minnesota.
Here's what I bought at Ingebretsen's:
* Lutefisk & Lefse lip balm
* Magnetic poetry kit in Norwegian" "over 500 ord med høy ladning ("with high charge"). Slipp følelsene løs, her har du ord ("go texas with these words!")
* A plaque that reads "what part of lutefisk don't you understand?"
* A couple of "uff da" greeting cards.

I didn't buy  Read More
Be the first to comment

We'll be in St. Paul through Sunday for my niece's wedding. I'll try to post but may not get the chance as I'll be spending the weekend with 49 cousins, all of whom I adore.
Be the first to comment

My Jawbone UP (same idea as a FitBit) is shaping up to be pretty cool. I like keeping track, in general (can you tell I'm an accountant's daughter?). My new mantra is "you manage what you measure." The UP is helping me get a better idea of how much exercise & sleep I get. (More sleep & less exercise than I'd thought.)

My favorite feature  Read More
Be the first to comment

The world is divided into two kinds of people: those who love office supplies and those who don't. My cheapest pleasure is spending an hour at Muji, which has wonderful & inexpensive pens & notebooks. I found a weekly planner that will replace my monthly whiteboard: this way I can keep track of previous and upcoming appointments, not just the current month's. Will it change my life? I feel like it will.  Read More
Be the first to comment

As the Grateful Dead's Bob Weir's underage girlfriend & simultaneously a big drug-dealer's girlfriend, she walked what seems now (& I'm sure to many people then) like a pretty dangerous line.

But she came out on the other side intact, not to mention smart & good-humored.

Closes Wednesday—see it if you can!  Read More
Be the first to comment

But that seems to be the best I can do today.
Be the first to comment 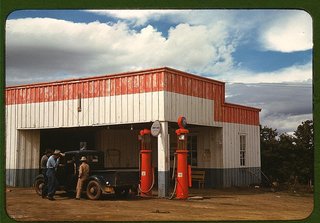 Filling station & garage, Pie Town, New Mexico.
How did people lounge before there were cars to lean on? Maybe the problems in the world today stem from the fact that there are computers inside our automobiles instead of engines (so to speak). Instead of pondering & fooling around & scratching our heads, our cars are sent for diagnostics. Nothing there we can fix.

We used to have leisure built into our lives: We had to wait on line, we had to wait  Read More
Be the first to comment

Tags: Thomas McGrath
Johnny and I are rereading McGrath's Letter to an Imaginary Friend. In our 25 or more years of reading long poems out loud to each other, we've never repeated till now. We are blown away just as much this time. McGrath (1916–90) is from North Dakota and is as good as Willa Cather  Read More
Be the first to comment

Headed for the heap 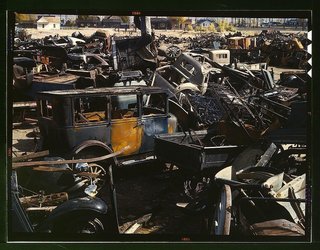 The houses in Butte could be new or a hundred years old, but the cars are unmistakably long-ago.

I bored my new doctor because nothing is wrong with me.

Even so, something is waiting. All expectations lead to the dump.

But until then, I'll jump up & down.  Read More
Be the first to comment 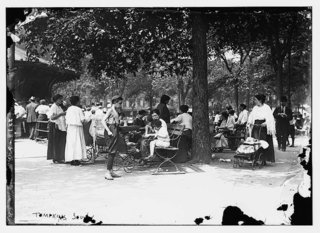 It's our local park, along with lots of little gardens that we float through in the neighborhood. I love that nothing (everything) has changed in a hundred years.
Be the first to comment 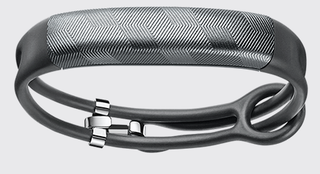 Jawbone UP: Tracks sleep & activity, logs food, coaches.
It's hard for me to get even things that will make my life easier. If I lived in the country, I'd probably shovel snow with a dustpan wired to a broomstick. I admire people who identify the tools they need & get them.

I don't think it's about indecisiveness: this shredder or that? I'm not cheap (look at my shelf of shoes if you don't believe that).

Today I bought  Read More
Be the first to comment 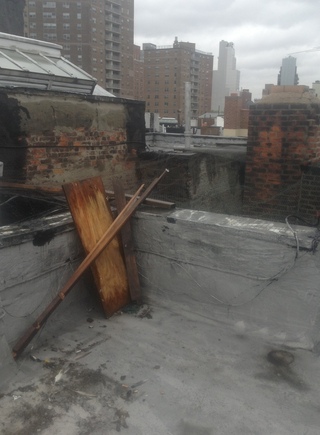 Maybe I like roofs so much because my secret place to read when I was a kid was the roof of our garage. You went through the backyard, behind the garage and the yards of the houses behind us, climbed a wall & a tree, and then you were out of sight, but close enough that you could hear if you were yelled for, and calibrate exactly when you had to appear. As the middle kid in a big family in a small house, that's where I spent many of the happiest moments of my childhood.  Read More
Be the first to comment

I *do* speak Norwegian

Hey wow. Once again, I put it out there & the universe responds.

I say far & wide that I am studying Norwegian, and my Finnish friend Heli shows up with two Norwegian friends. Who spoke to me in slow but not mutant-slow Norwegian, & I frigging understood them. And I constructed sentences in response—not Read More
Be the first to comment 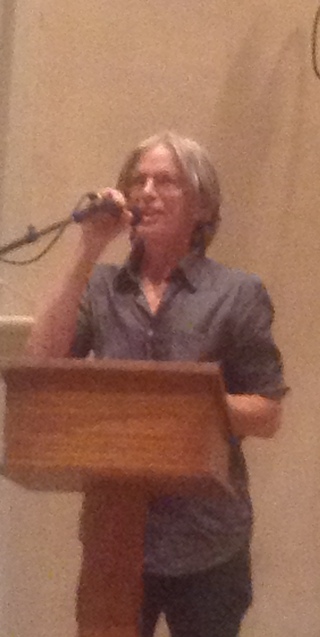 In the spirit of Eileen's adventurousness, I read a poem of hers that I translated into Norwegian:  Read More
Be the first to comment

Once again I was off on Monday & Tuesday for the end of the fall holidays.

Today I was getting ready to be part of Eileen Myles' book party by translating a poem into Norwegian. She's always trying something new & risky, so I figured I would too.

I'll post it tomorrow if I don't get tomatoed off the stage when I read it.  Read More
Be the first to comment

October 1: the earliest that anyone hqw said to me "aren't you cold?" because we were dressed for different seasons, me in a tee-shirt, him in a coat heavier than my winter jacket. It was maybe 60°. This happens all winter. I like being warm indoors and cold out.
Be the first to comment

A little vacation in the sky 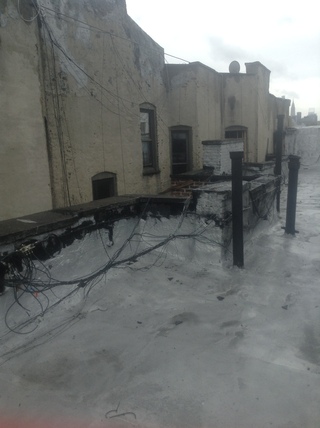 My super let me go up on the roof with him this afternoon, something I've always wanted to do (because I always want to go up on any roof) (possibly because I was once a roofer?) (& didn't realize that my basement key opens the building's door as well). Such a different view than from my home building, even though it's just a couple of blocks away. I like this photo because it feels like a medieval Spanish alleyway more than an East Village rooftop.  Read More
Be the first to comment 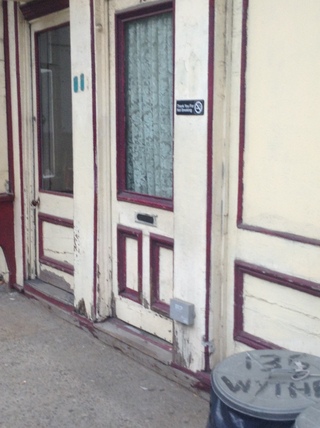 It felt like we were away, and it was just one subway stop into Brooklyn. It made me wish I'd been a pioneer here, but when I moved to the East Village, there was no Brooklyn, so to speak. By which I mean, in the late '70s, Brooklyn was where you went to raise a family not be a poet.

I try to look at the world around my home, & I feel surprised & delighted often. But it's not the same as going somewhere else.

Even if that's Brooklyn.

(And I mostly looked across the East River at Manhattan.) Read More
Be the first to comment
Loading…}