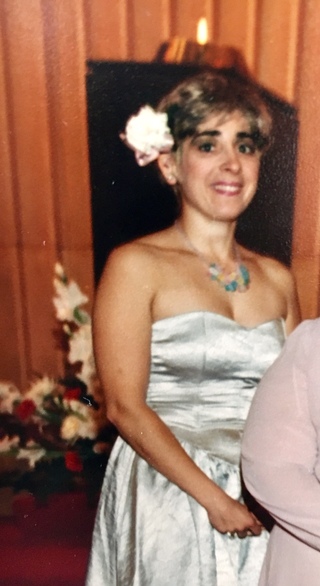 I bought this dress to impress an old boyfriend. It worked but scared him off even more. I wore it to my brother's wedding in 1985, where several of his Minnesota colleagues took one look at me & said, "You're the sister from New York." You can't tell in this photo but my hair was dyed to match the bridesmaid dresses (I was an usherette), maroon over calico. 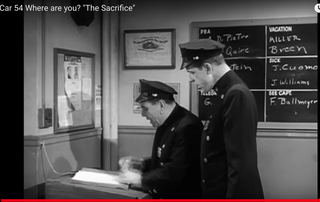 My dad liked this show & I remember watching it in the early 60s. I wonder if seeing its homey NYC neighborhoods planted my desire to come here. The Bronx of Car 54 is much like the neighborhood I settled in, a shabby world of small buildings & neighbors.

The show is dumb but often funny, with some sophisticated themes & moments. A Ninotchka knockoff, for example. It's also somewhat topical, starting with the theme song ("Kruschev's due at Idlewild"). Naturally there's a lot of mugging, especially by Fred Gwynne, but he & Joe E. Ross have genuine affection.

Guest starts included Molly Picon, Maureen Stapleton, Heywood Hale Broun, Simon (Bullitt) Oakland, Sugar Ray Robinson, Rocky Marciano (or was it Rocky Graziano?), Hugh Downs, among others. Nipsey Russell is on the force, without much to do. 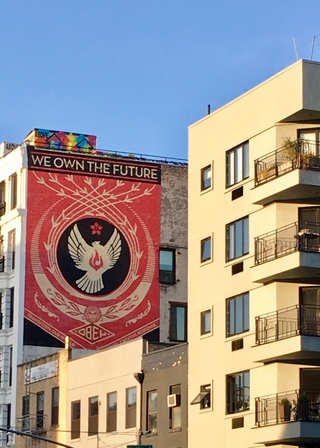 On the Bowery. The words underneath: "Transform our world with creative response."

I run into Alisa, Ola, Ashley. Do I only know people whose names start with vowels?

I have a frustrating conversation with the checkout person at New Yorkers supermarket. She charges me $1.34 each for yogurts that are 3 for $4. I point out that she owes me 2¢. No! She divides $4 by 3 to prove that they each cost $1.33333333333. Yes, but that's not what you charged me—instead, multiply $1.34 by 3. She looks at the result $4.02 & shrugs. She gives me $10 in singles so I insist on the two pennies I'm owed. She still doesn't believe me but takes them out of a little dish. I think about getting the manager involved, not because of the money but because of the math that she doesn't understand. "Give it up!" I want to say. "I was a math star for Mineola Prep!"

The only way of discovering the limits of the possible is to venture a little way past them into the impossible.

This reminds me of a Calvin & Hobbes cartoon, where Calvin asks his dad how the load limit is determined for a bridge they're crossing. They send heavier & heavier trucks over it till the bridge collapses, his dad explains. Then they weigh the truck & rebuild the bridge. (It is easy enough to find the actual cartoon.) 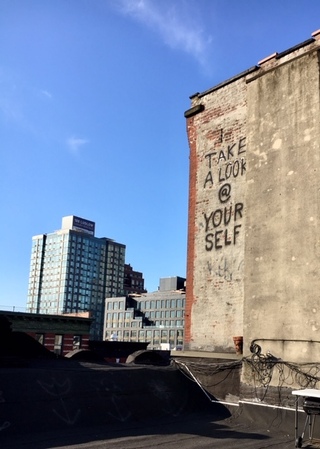 We've had visitors! Visitors with spray cans! This is just one of the new messages & pictures. There's also "Rivington Skol" & a big red vaguely ominous blob, maybe with eyes? I dig 'em!

It's cleaner than I've ever seen it up there, too. It used to be I would pick up bottles, syringes & broken bricks, & try to find a ledge that wasn't disgusting to sit on. But it's nice these days. 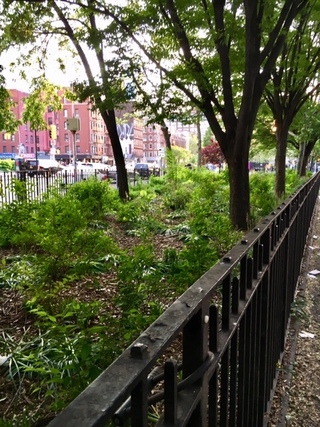 The 0.192-acre Peretz Square is no square but a strip, a slice, a sliver. It's across the street from me but in all these years I never knew anything about it. I have just learned that it's not Perez but Peretz, not named after a Puerto Rican luminary, but Polish-born, Yiddish-speaking playright & poet I.L. Peretz, who never lived in the U.S. and I don't think ever even visited. So odd that he is honored here. The French author Georges Perec was a distant relative. 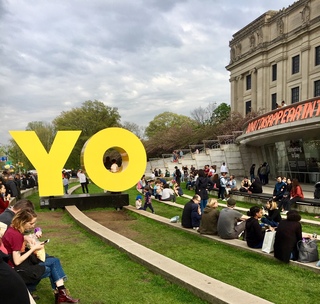 too clever by half? oy! 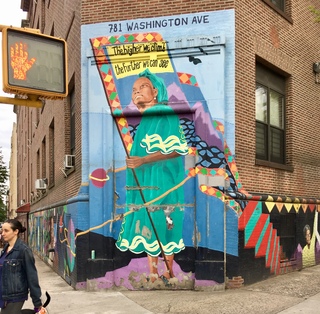 Not far from the Brooklyn museum, on Washington Street.

The higher we climb, the farther we see.

Although I think it says "further," thus not limiting the possibilities to physical views. 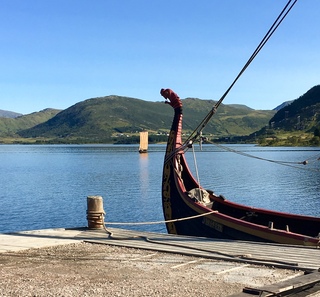 Can’t hold those Vikings back!

It’s Norwegian Constitution Day, so here’s a flashback to my wonderful trip last summer. 205 years of independance from Sweden. 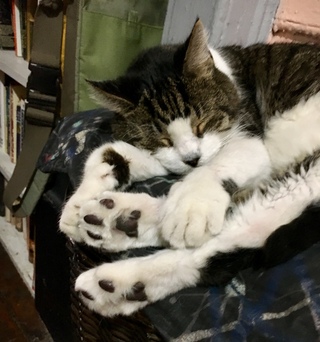 I love taking photos of this handsome being.

Helplessly in love, I am. Buster is the purringest cat of all time. He purrs when I pet him, when he thinks I'm about to feed him, while he's eating, when I pass by. It's constant & loud & loving. Amazing to have such a bond with a nonhuman person.

The choice was too small to see or too big & out of focus.

Our duvet cover is getting weary. Is this flaming basketball a good idea for a replacement? Is the fact that Johnny really likes it in its favor? Why can't I find one that's nice cotton, colorful but sedate, & something we can live with for the next 5 years? Where does one go to look for duvet covers, since this is the best option I've found online, & I'm thinking... No.

Education is a progressive discovery of our own ignorance.

Ain't that the truth. The more I know, the more I learn how little I know. It's wonderful in a way—it's clear that I will never run out of eye-openers.

am I performing normality? 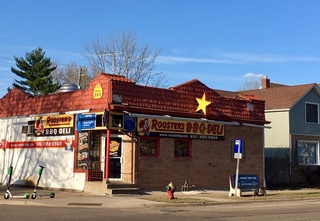 Would I have gone in if Rooster's had been in Tulsa or Waycross, Georgia, rather than St. Paul, Minnesota? Or maybe I would have been less likely in the Southwest or South to see what they had? The only person I know in Minnesota who might be called an adventurous eater (she (we) ate dog, or maybe horse, tacos at a bullfight in Mexico City where we were the only gringas)—well, I will have to ask if she's been to Rooster's. I no longer know, I guess, what "adventurous" means.

In the neighborhood: Last Light bar 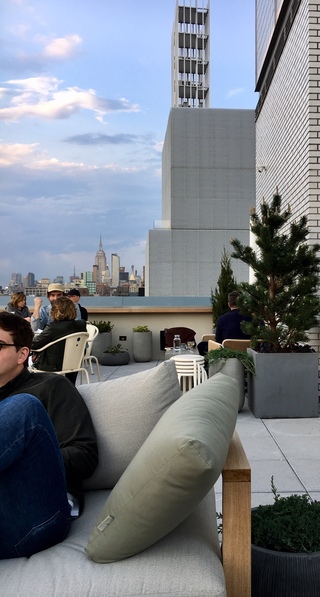 On the 11th floor of the brand-new Sister City hotel on the Bowery is their outdoors lounge, the Last Light Bar. I'm not hip enough to know to go here within 2 weeks of opening—my old friend David Morrison built this hotel. The New Museum is dead ahead in this photo. These few blocks—Bowery, Rivington, Stanton—are among the last to get gentrified in the neighborhood. I certainly never imagined a fancy place like this could ever displace the brightly lit bars of yore. It always seemed awful to drink in a bar brighter than the day outside, but that was the norm on the Bowery 40 years ago.

It's not exactly like 212-260-6142 was part of my deepest identity, but it is the number I've had ever since I moved to my apartment in 1977. Eventually, like everyone, I switched to a cell, mostly because Verizon couldn't or wouldn't fix the line. For over a year people have only gotten a busy signal, & I've been paying all that time for nothing at all. I wish I could still have a landline: it was worth it for the very few times I really needed it—on September 11, 2001, especially, and during a few blackouts. I feel a little sad but I tell myself I have a good enough, maybe even better, number now: 212-677-3792. Call me up sometime!

Why did you get a new number? Why didn't you just port your number to your new phone?

Good question. I had turned my office phone to my cell a year and a half ago (for the same reason—Verizon wouldn’t/couldn’t repair my line). So I had that cell & I like my office number better, actually. Although a 260 exchance is a venerable one. I would have switched if I hadn’t had a 212 number: no 646 or 347 for me!

In the neighborhood: art in action 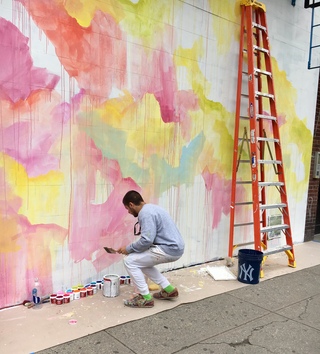 Leisurely walk south of Houston & here was this Spanish painter at work. His friend told us his name but I only half-heard & let go of it instantly. This was a couple of days ago—I'll try to get back over there (Allen Street, east side) & see if it's sullied yet by graffitti. So pretty that I hope not.

The only thing new in the world is the history you don't know.

I want to recommend Tyrant: Shakespeare on Politics by Stephen Greenblatt. Such a smart look at contemporary affairs through analyses of Macbeth, Coriolanus, & Richard III. From which he learns, for example, that there are always people in a new regime who will do anything to win the ruler's favor. And "the purely conventional and meaningless emblems precipitate a rush of both group solidarity and group loathing. This loathing is an important part of what leads to a social breakdown and, eventually, to tyranny." He covers the cynical use of populism, how respectable people are eager to benefit while appearing blameless, why the rich want more more more when they already have more than they could ever use. 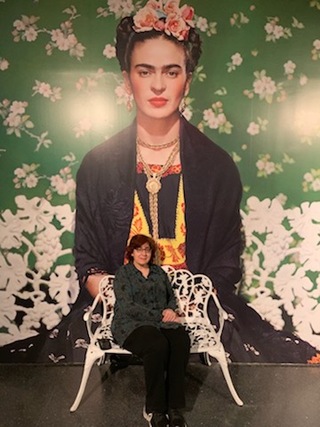 Glad to get the (unexpected) chance to go, thanks to a last-minute ticket from a friend, but didn't love the show. Not enough of her actual work, & no matter how interesting her life, clothing, collections of indigenous art (represented by similar items from the Brooklyn Museum's holdings), the point is the art. No photos so I can't show the best painting by far: "Diego on my mind," an icon-like painting of her with a little Rivera in the third eye slot. "I suffered two grave accidents in my life," she once said, "One in which a streetcar knocked me down … The other accident is Diego." 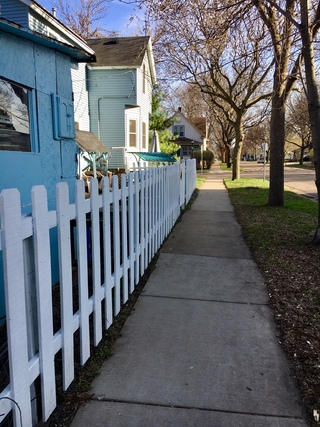 All those Twilight Zone episodes where people return to their hometowns as adults & see themselves as kids. People live like this! St. Paul on a sunny afternoon... 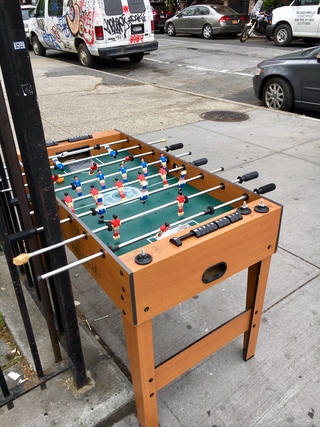 Somebody had an apartment big enough for this.

Somebody had no other furniture.

It seemed like a good idea at the time.