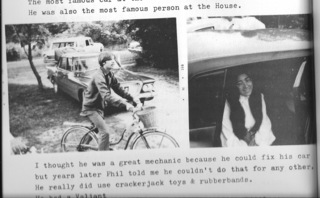 A page from my first book, CARS & other poems. Long-lost Sam on the left, & me age 19, dressed for a hippie wedding.
When I was an 18-year-old hitchhiker, I had a mission: to find the best hot fudge sundae in the world (really, the Midwest). I ran out of appetite pretty early on, having never really been a collector, but not before the prize went to a diner on the outskirts of Eau Claire, Wisconsin.

It was good to have a goal.

Some things were easier then. For example, no one had invented multitasking.

Some things were harder. At least now I no longer have to decide whether to keep studying Sanskrit (nope), become a cobbler (good heavens, not anymore), break up with so-and-so (yes! what was I thinking? yes!).  Read More
Be the first to comment

September 9, Whole Foods
“In the dawn, armed with a burning patience, we shall enter the splendid Cities.” —Rimbaud

a breeze flies by

cafeteria roomy
they don’t bother you

“Someone stole your bag while you were in the john.
You didn’t say  Read More
Be the first to comment 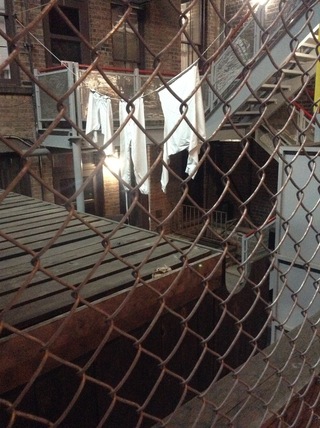 I miss the days when my neighborhood was raggedy & people just hung up their underwear to dry, unconcerned about looking good every second. Now I'm just an invisible lady with gray hair that the cute girls knock into while texting. Wait! I'm not complaining! (I'm on Complaint Restraint this month.) It is what it is. Shabby always makes me happy & I loved seeing this the other night in an Allen Street backyard. Read More
Be the first to comment 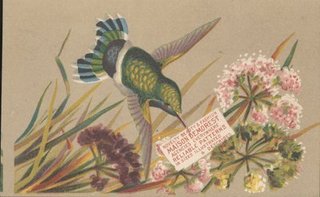 Amazing hummingbirds
I've had a line stuck in my head since I was a teen: "little beings of pure spirit whose normal body temperature is 125°." It's from Salinger's Seymour: An Introduction, & I have no idea why it's followed me all these years, anymore than I know why I remember the words to "Winchester Cathedral" or the birthdays of half the kids in my second grade class. He's talking about birds. 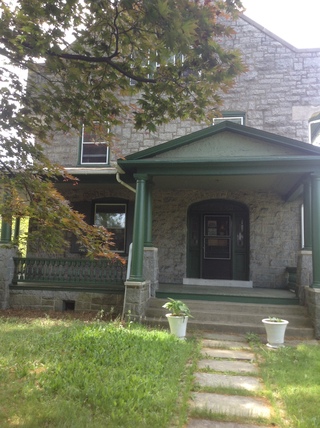 McCarthy-Varrone house
I spent Sunday in Philadelphia. LOVED it. I can't think of the last time I was there—it must be 15 or 20 years. Everyone was so friendly, the poetry scene is supportive & enthusiastic while of the highest artistic standards (too many to name), everyone knows everyone in a comfortable & seemingly non-incestuous way. And it's only 2 hours away on the $20 (roundtrip!) bus that's just a few blocks from me.

Kevin Varrone & Pattie McCarthy host an occasional reading in their barn, their kids run around announcing that "more poets have arrived!," he cooked all day long, everyone has a car, Shanna Compton is an amazing poet to read with, I felt happy & welcomed.

Philadelphia, I'll be back!  Read More
Be the first to comment

Off to Philly for the day

Not Monday, Tuesday. Monday's a holiday.
Be the first to comment

Tags: Frank O'Hara
Is a poem still good if you have to hit the listener or reader over the head with how good it is? Does every poem have to work the first time you read it? Frank O'Hara's “The Day Lady Died” has never failed before but when I read it to a couple of non–poetry lovers, they merely paused politely & went on with a different conversation. Maybe it was the way I read it? Maybe all those details are no longer evocative?  Read More
1 Comments

Not all poems, books or movies have meanings the first time around. The meaning may come after you have had time to let it sink in or when you need it to mean something.

Tags: Alta Starr, Gibney, somatics
I'm a fan & friend of Alta Starr, who I knew first as a funder of social justice projects. Her latest career is called Generative Somatics: "The mission of generative somatics is to grow a transformative social and environmental justice movement—one that integrates personal and social transformation, creates compelling alternatives to the status quo  Read More
Be the first to comment

I turned an engineering text into line-broke verse and everybody clapped.

We created Maria Mancini with no idea of being in a thousand-year tradition of personae.

All that I didn’t know, I did.
Be the first to comment

English as a second language

Why do use the past tense in “I went to the beach this morning”? Surely this morning is not the past! Merce explained to her class (Spanish speakers learning English, taught in Barcelona) that you do so many things on vacation that even this morning feels like long ago, hence the past tense.