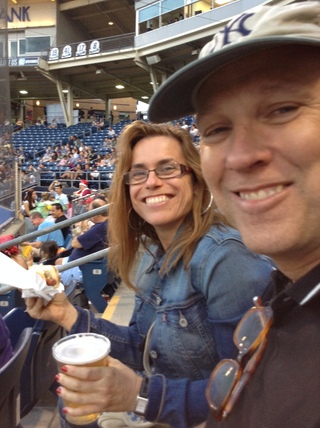 Mercè at her first-ever baseball game; note hotdog & beer. Neil at far from his first game.
I can't imagine a more perfect night. Sitting outside in 70° weather, in the 3rd row almost behind the backstop (we missed two foul balls by one row)—and for $15 no less. Leisurely conversations. No electronic distraction. Getting to Staten Island by ferry, the 1st Avenue bus waiting at the terminal on the way home. Explaining baseball to a Spanish newbie, and tangling ourselves into memory & history. How threadbare my life would be without baseball.  Read More
1 Comments

Couldn't have had a better introduction to baseball than such a delightful evening in the company of the two of you! Thanks Elinor for making me a bit less ignorant about baseball!

"And if the weather pleases me, I'm happy every day."

Thanks, Ted, I wish you were here to be enjoying this rare streak of 70° unhumid July days.
Be the first to comment 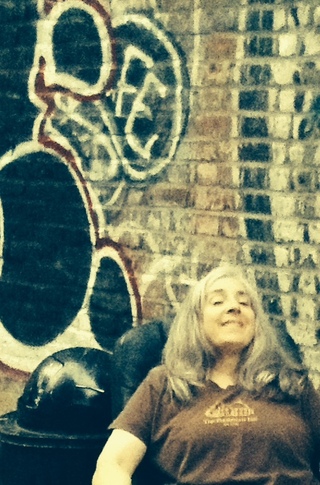 And here, I'm lounging in the same little "park" on 1st street, sitting in an abandoned office chair.

I was so happy not to get cooties.

I took the "Urban delight" photo from this chair, & Mercè took this one of me.
Be the first to comment 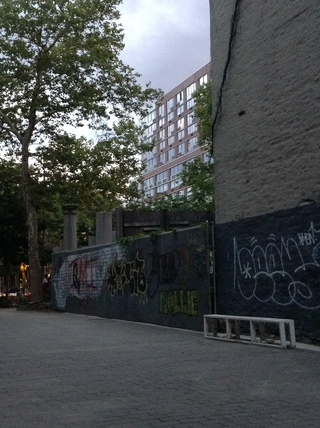 In the city, ya takes yer nature where ya finds it.

The "benches" are discarded shelving.

But a nice view up & out.
Be the first to comment

never a little boy
/ with a camera /
but I knew joy

never a grandmother
/ in a black hole hat: /
I’ve been of my times 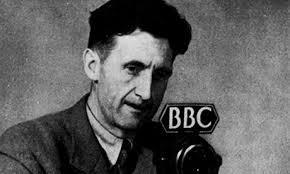 Still worth reading!
In an argument with Vera Brittain (whose Testament of Youth is the best account of WWI by a woman who was in it), Orwell writes:

"Why is it worse to kill civilians than soldiers? Obviously one must not kill children if it is in any way avoidable, but it is only in propaganda pamphlets that every bomb drops on a school or an orphanage. A bomb kills a cross-section of the population; but not quite a representative selection, because  Read More
Be the first to comment 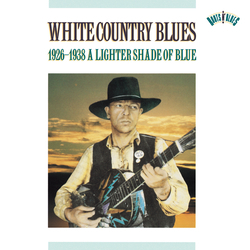 I knew I would hate myself if I didn't go to class, so I got on my bike & went to the dojo. Michelle looked at me & said, You look like you could use a hug. My day got better from that moment. All the sad-mean news of the week kind of washed away. A little.

Class was fun: Kaicho divided us into 3 groups of 7 to do synchronized kata. He told our group to do something unique, so we faced different directions—& didn't kick each other. I couldn't not laugh, though that's a no-no in karate: we're supposed to keep a straight face no matter what. Saw some folks I like who hadn't been around for a while.

Today, I was told, was supposed to be the best day of the year, with the most energy & insight.

What I got was an invasion of waterbugs & 3 rush deadlines.

Maybe tonight will bring amazement.
Be the first to comment

I sat in her truck double-parked.
Drivers cursed.
She carried down stuff for a week
in Provincetown.

We drove around the block.

Then she carried it all back up
and stayed home.

I am an ignorant American

Tags: languages
My friend Mercè is visiting for a few weeks from Barcelona. Her first language is Catalan, and she is fluent in Spanish, French, Italian and English. I believe she can get around in a few more. She translates American thrillers into Spanish & is also a simultaneous translator.

Thanks for mentioning me in your post!! The best thing about languages is that each of them represents a different vision of the world and this can only enrich people's mind. 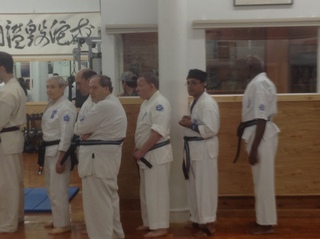 from R to L, Segg, Ray, Jose, Larry & Rene (behind Larry), lined up to get their medals
So happy that many of our YAI students participated in the interdojo karate tournament. They love being part of Seido, & I'm always cheered (& relieved) that they are welcomed so warmly. I worry that the regular students—many of whom have physical and mental issues of their own, I know—don't appreciate how hard these guys struggle to learn, retain & practice their material. They have class at best 2 times a week, which is tough enough. That plus all the challenges they face daily, such as just getting around. By far the most rewarding thing I do is spend an hour a week with them as an assistant teacher in the karate program at YAI.  Read More
Be the first to comment 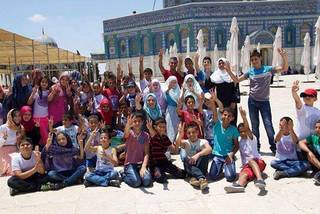 Why is that? Are they aware that 2 of the 3 people who murdered Muhammad Abu Khdeir are mentally ill? that those men were arrested & indicted? that they were quickly & loudly condemned by most Israelis? 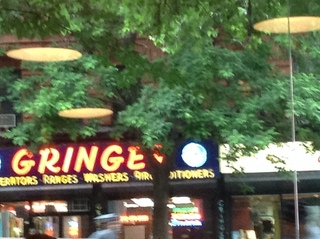 The Ezra Pound from across First Avenue (note the rare yellow neon in the Gringer's sign)
I may not own my apartment or the building it's in, but having lived there for 37+ years gives me moral equity. It's my home. It belongs to me emotionally, physically, atmospherically—just not legally.

I say this thinking about how my neighborhood, the East Village, has been eaten up by real estate interests, driving out poor and working and middle-class people. Many of my friends are harassed by their landlords, who would love to "renovate" their apartments then lease them for 3x or 4x as much rent. How can that be right?  Read More
Be the first to comment 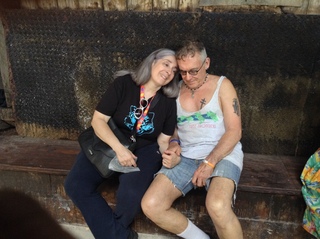 I also like to look at pictures of Johnny & me.
Here we are, right now.
Not here, in Brooklyn.
Not right now, a week ago.
Be the first to comment 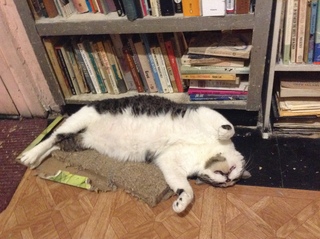 I just think it's a good idea to look at Buster a lot.
Be the first to comment

Tags: Francine Prose
"She was happiest in Umbria and the spookier parts of Tuscany, where you felt the romance these people craved was not the romance of love but the romance of poisoning each other with undectable toxins."

This sentence by Francine Prose makes me feel that if I'd written it, I could eat bonbons for the rest of my life.

I bet she doesn't feel that way at all.  Read More
Be the first to comment

If you're a synagogue- or church-goer, you have something in common with others who are observant, never mind the specific religion. Because I like to go to shul, I like to go to church. Yesterday it was the East Village's Middle Collegiate Church, which is right around the corner. Wow, that was some dynamic preaching! And some singing! Did they all come down from the Metropolitan Opera &/or Broadway to hit the hymns?  Read More
Be the first to comment

Shakespeare in the Park- 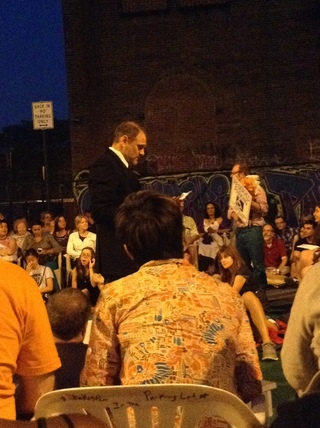 Our oldest grandchild, Celeste, is an intern for them this summer; her ambition is to be a stage manager.

So we went to see Twelfth Night. Sadly, the DOT is selling the lot so this is their last season here. It's fun to see a theater work with almost nothing, strictly for love—amateur in the best sense.

After, we got interviewed for Japanese television, because Johnny was wearing a t-shirt with Shakespeare's picture & the legend "Will Power." He said we've been coming for 20 years. Free, outdoors, New York event: what's not to like?

We saw every play by Shakespeare at the Public from 1987-97 (by buying the whole package in advance). Joe Papp promised to kiss everyone at the last production but sadly, he died in 1991. We saw Al Pacino, F. Murray Abraham, Anne Meara, Cynthia Nixon, Milo O'Shea, Kevin Kline, Jerry Stiller, Christopher  Read More
Be the first to comment

photo by South Dakota artist Christian Begeman
When I see pictures of South Dakota roads, I feel such longing.

Local buildings, trees, wildlife don't do it for me. Not even the house I grew up in.

Is this scene appealing if you don't already love the prairie? 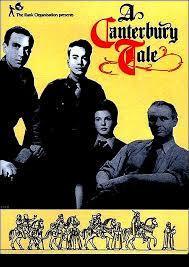 A great film, though nothing to do with Chaucer
Very excited to start our new read-aloud long poem: The Canterbury Tales. Johnny has resisted because I want to read it in Middle English and he prefers modern English. We finally figured out a compromise: his turn, it's the Neville Coghill translation, while I'm stumbling through the original. In a day or 2, I'll be sailing along; Middle English is English.  Read More
Be the first to comment 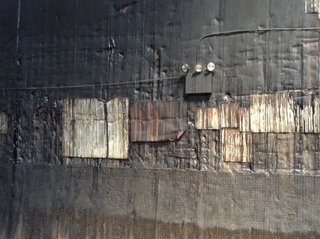 Inside the Domino
One wouldn't think something made of 80 tons of sugar could get anywhere near the word subtlety, & I would never have come up with that description on my own. A subtlety, I learned, is a sugar sculpture, created in the olden days for special occasions and the tables of the wealthy.

Kara Walker's majestic subtlety is a Brancusi sphinx that is 75.5' long, 35.5' high & 26' wide, displayed (through July 6) at the old Domino sugar factory in Brooklyn, which was in use from 1882 through 2004. Her installation is subtitled: "A Subtlety or the Marvelous Sugar Baby an Homage to the unpaid and overworked Artisans who have refined  Read More
Be the first to comment 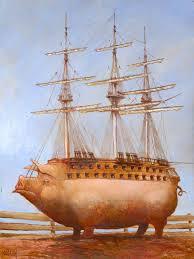 A more sober account
I liked both of these pictures but can't figure out how to use both in one blog post, so this is a gratuitous addition. 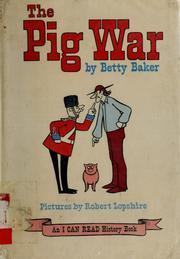 read all about it! (& more—this is a strange & great link)
The 1859 Pig War was between the United States and the British Empire over the boundary between the two in the Northwest, specifically at the 49th parallel in the San Juan Islands, which lie between Vancouver Island and the North American mainland. It was set off when an American settler shot and killed a British pig he caught in his garden. When British authorities threatened to arrest the assassin and evict his countrymen, they ran to George (Pickett's Charge) Pickett.

Both sides eventually agreed to joint occupation. Today the Union Jack still flies above the British Camp and is raised and lowered daily by park rangers—making it one of the very few places without diplomatic status where  Read More
Be the first to comment 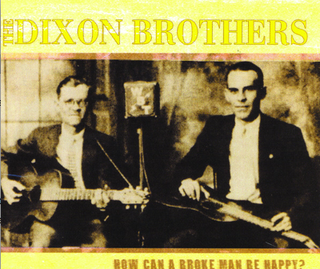 How can a broke man be happy?
I was thinking about the Dixon Brothers and the Blue Sky Boys, which led me to think about the many sibling acts throughout popular music, particularly (I think) in country music. A quick look on my iTunes turns up the Louvin, Stanley, Neville, Mills (yuk), Delmore, Isley (Shout!), Allman, and Everly brothers (et al!), plus the Peasall and Secret Sisters (who in fact are sisters). There’s also the Carter sisters, the Carter brothers & the Carter family; Brian, Dennis & Carl Wilson: the Beach Boys; and the McGarrigles (+ various Wainwrights), who might be the best of them all. Man, I just love families making music together. Something about those close harmonies.

The man I don't love

If he'd had a fanny pack, I might have hit him.
1 Comments

Hilarious, Elinor. I'd have joined in as well.