I usually figure it out in the course of the New Year's Eve festivities, which consists of me & Maggie having a giant hours-long conversation: how was your year? what does the year ahead look like? how are we going to accomplish our goals?

The best innovation in 2017 was identifying 3 top goals & focusing on them. I had a some additional ones but kept the heat on my top 3. So I will do that again this year, I expect. Last year it was easy: finish a manuscript, prepare for my karate promotion, improve my Norwegian. I'm not sure I'll come up with 3 as timely as these but I'll find out tonight.

Wake up! & Fight!  Read More
Be the first to comment

I don't mix up Bob Holman with Bob Rosenthal, or Charles North with Charles Bukowski, so why can't I remember the difference between Kenneth Patchen and Kenneth Rexroth?
Be the first to comment

Pound for pound there are only around twice as many rats as raccoons in NYC. A raccoon can weigh up to 20 pounds, & a rat weighs half a pound. If there are 2 million rats (not the old estimate of 1 per person), that's a million pounds of rats. Divided by 15, the average weight of a raccoon,  Read More
2 Comments

I hate raccoons and I hate rats twice as much. how does the math equate on that?

I call them ferrets. As in, we have a ferret invasion. There was ferret shit in the hallway. It kind of makes it not so hideous.

"Can I ask you a question?" a tall young man asked in front of the Rite-Aid on my corner. "I'm not asking for money, I just have a question."

"Can you buy me a $4 box of cereal?" he said. "I just asked everyone in the Rite-Aid & no one would." This was said a little indignantly.

"How is that not asking for money?" I said.  Read More
Be the first to comment

A woman in her 40s (?) with very bleached hair pushed through a crowded train. "Marriage is slavery," she said out loud to herself. "They beat you when they want, make you have a baby for them, beat you. Marriage is slavery."

The woman standing next to me caught my eye. "He beats you twice, why you hanging round?" she said.

"You know that old song?" I said & and sang softly:  Read More
Be the first to comment

I'm dreaming of a white December... January... February... Rain is NOT the next-best thing.
Be the first to comment 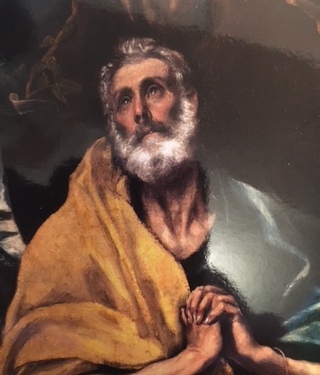 The main reasons we went to Toledo:
* Mercè had never been there, despite having lived in Spain her whole life. I liked the idea of being on somewhat equal grounds in both of us experiencing it for the first time.
* El Greco. The best museum show I ever went to was El Greco in D.C., maybe 25 years ago, with Janet. It was different to see him everywhere in Spain—in a church, in his house, in a museum, in the cathedral, in the sky & landscape he knew so well.

Still my favorite painter & I still can't really say what he does that no one else can. The humanity of his people, I guess. His apostles (this is Peter) are full of both grace & flaws. His Jesus is perfect yet human.

El Greco has only art on his mind. He paints what he has to.

Bonus reasons for going to Toledo: marzipan ("bread dough"), softer & less sweet than what I'm used to, & manchego cheese–it's from sheep & has been made there (La Mancha) for 2,000 years.  Read More
Be the first to comment 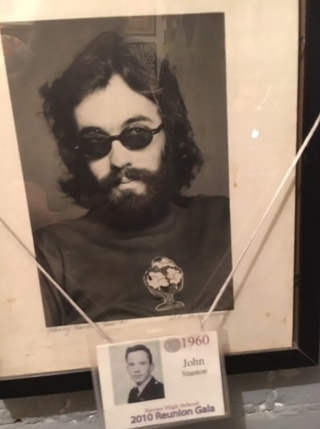 This was the Johnny I didn't fall in love with. That beard! He's so much more handsome now (the day before our 26th wedding anniversary).

And the youngster I have so little connection with, the kid I've only seen a couple of pictures of. He graduated high school at 16, before he'd gotten his growth spurt. My main image of high-school Johnny is seeing him with his first wife, who was his high-school girlfriend. With Johanna, he's playful in a 1950s way, & I love watching them together.
Read More
Be the first to comment 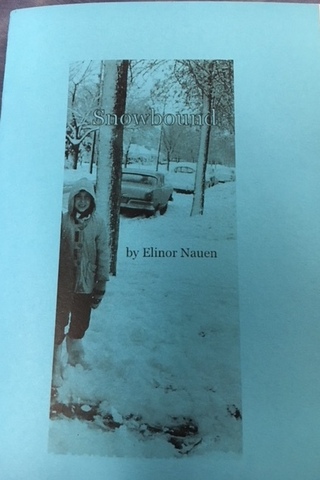 ... and I just picked up copies of my (our) new chapbook! It's a dos-à-dos book, with my long poem called Snowbound back to back (or upside-down) with 3 essays by Steve Willis, also called Snowbound. I can never figure out how come it works but both books start on page 1 & collide correctly in the middle.

At one point I thought it was going to be a book but it melted into this chapbook. Happy winter!  Read More
Be the first to comment 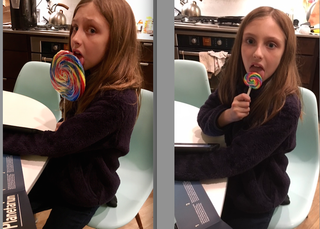 Before & after.
I love this girl. 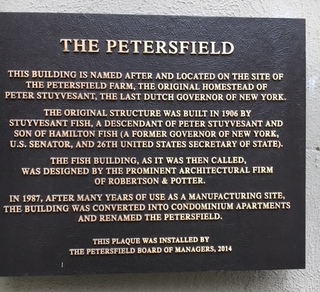 I suppose I walk by plaques like this all the time, either without noticing them or without pausing. I do love these bits of older bones breaking into the modern world.
Be the first to comment 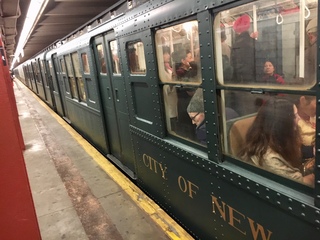 We went to MoMA on a historic subway from the 1950s.
Fun to go to MoMA & see a few rooms full of Club 57 memorabilia: films, posters, photos, TV clips. I didn't go there a lot—it was more for artists & performers but we would go once in a while & I read there once or twice when they deigned to let the poets break in.

Then upstairs to look at Max Ernst & realize he was doing all the same stuff, by himself, 50 years earlier, & with training & talent.

I was a brat myself, then.

I made the wee mistake of saying to a very serious friend who happens to play tuba in a symphony orchestra, "How hard can it be to get an oompah out of that thing?"

First there was a breath test: I had to blow one of those little balls aloft long enough to be graced with a tutorial.  Read More
Be the first to comment

Even the lovely snow barely got me moving. Although yes, I did get up, get dressed & go for a walk. And it is lovely. Another reason snow is great is because it's just as good indoors as out, just as beautiful through a window as it is falling onto the city. "...the snow falling faintly through the universe and faintly falling, like the descent of their last end, upon all the living and the dead."  Read More
Be the first to comment

I don't think I've ever been sick for a whole week except when I had pneumonia (twice) & typhus (once). My life right now is wake up, read a chapter of The Old Curiosity Shop, fall asleep, wake up, make a cup of boiling water with ginger & lemon juice, read a chapter, fall asleep. Oh, and cough cough cough.  Read More
Be the first to comment 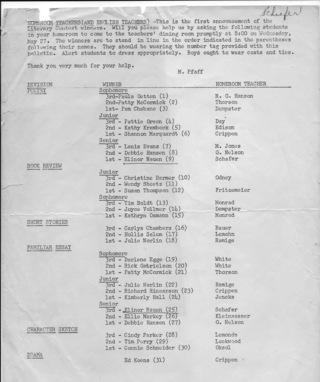 Look! First prize in poetry, & 3rd prize in "familiar essay." Obviously I didn't enter for book review, short story, character sketch or drama, or I would have been whizzing through that line again :-). I don't remember Miss (Mrs? Mr?) Schaefer at all. Not Mr—that I would have remembered. Though much abides, much is taken.  Read More
Be the first to comment 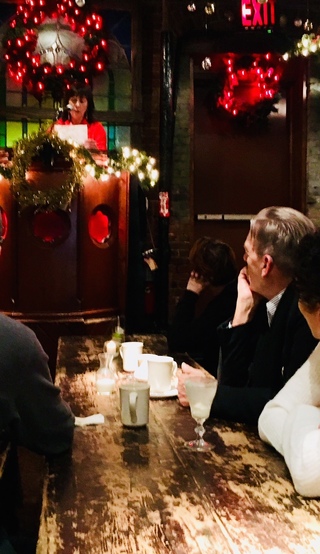 Maggie reading at Swift Hibernian on 4th St, 12/10/17.
I landed at 3:15 on Thursday, & by 6:15 was at the SideWalk for Prose Pros, with Alice Gordon & Thad Rutkowski. Very different in tone, reading style, subject matter but I liked both of them enormously. Sunday's Local Knowledge reading had 3 readers—Sergio Satellite, a young Dominican poet, Maggie Dubris, & Mike DeCapite—who overlapped & enhanced one another. There was some thematic resonance & so each reading magically became a commentary on & intro to the ones that followed & came before. I love when that happened. Maggie read a piece about the Gypsy flamenco singer Manuel Torre, who is not very well known in Spain, I believe—at least my friend Mercè, who has lived there her whole life & is an aficionado of flamenco (her parents opened the first flamenco tablao on the Costa Brava), didn't know him.

This despite a cold that laid me low & kept me from the Seido holiday party & kids' promotion, among other fun events I'd been planning (or considering) to go to.  Read More
Be the first to comment 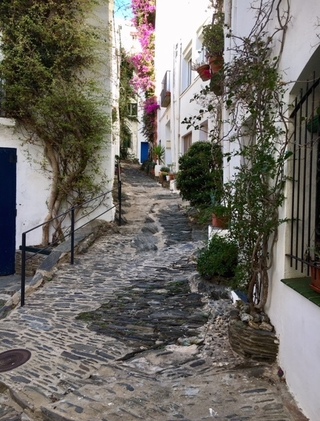 A street in Cadaqués.
Because I posted a few photos every day on Facebook, vicariously taking quite a few friends along on my vacation, or so they said, I don't have the urge to do it all again now that I'm home. Plus my rule of thumb for this blog has largely been doing my writing at the time, not days or weeks later. Write now, post later—that's OK; but not Experience now, write later.

I did feel like I was embedded there, part of Mercè's family & daily life. I said of course when she asked if I wanted to just do & see what she loved, & since she is brilliant, wonderful & has great taste, I saw & had brilliant, wonderful & exquisite places & experiences: Toledo with El Grecos, marzipan ("bread dough"), & incredibly winding lost-inducing streets; an hour as we passed briefly through Madrid at the Prado for Velasquez, Goya & El Bosco (Bosch); the glorious Barcelona opera house—in a box no less!—for a family version of The Magic Flute; Girona with its Jewish museum in the former home of the Ramban (but no Jews); the medieval town of Besalú; the voluptuous beach town of Cadaqués, with its white walls and bright blue doors where Mercè spends a couple of weeks every year; her two little girls, who spent hours concocting vegetarian dishes; meeting her friends & sister; trying to understand the political situation .... all this in a week!  Read More
1 Comments

Dear Elinor, I don't know why just a few moments ago I realized that you would have written about our trip together in your blog! So here I find your feelings about it and so much flattery... I'm delighted to be your friend and of course you are part of my family!! Lots of hugs and kisses from Girona.

I got back from Spain a couple of days ago with the unwanted souvenir of a cold.

Tags: Ron Padgett
Tuesday night Johnny & I went to a bookstore on 10th Ave in Chelsea to hear Ron read from & talk about his novella Motor Maids Across the Continent, a book that most important has a character named Elinor ("not you, my dear") & that I learned was something he first wrote in 1964. He said every 7 or 8  Read More
Be the first to comment
Loading…}