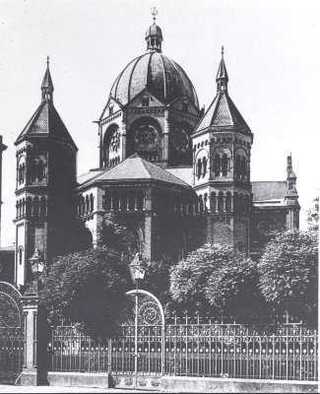 The Neue Synagogue was destroyed in 1938, during Kristallnacht
I know my dad's family was Reform, & I know they were moderately well-to-do, so I think it's a pretty good guess that this was his synagogue.

I wonder why his family left Breslau? Was it like leaving Boston for New York? It's about the same distance & with much more opportunity in the bigger city. His parents had little Hans & Charlotte (I can't remember if she was older or younger). Was it in-law trouble? Or maybe the relatives were in Berlin & Breslau was just a waystop?

My father's been gone almost 30 years, my oldest sister more than 10—who would know the answers to any of this? Frustrating but thrilling to have new questions. And why didn't I ever wonder about this before?

Update: My mother says Dad's father had gone to Breslau to work in a department store; they weren't from there. Also, his sister was older.  Read More
Post a comment

"A true Berliner comes from Breslau"

Breslau, in 1900, where my dad was born in 1906
I'm reading a noir mystery called Death in Breslau, by a Polish novelist named Marek Krajewski, which I bought because it's where my father was born.

The 1900 census listed 5,363 people (just over 1% of the population) as Polish speakers, and another 3,103 (0.7% of the population) as speaking both German and Polish. The population was 58% Protestant, 37% Catholic (including at least 2% Polish) and 5% Jewish (totaling 20,536 in the 1905 census). The Jewish community of Breslau was among the most important in Germany, producing several distinguished artists and scientists.