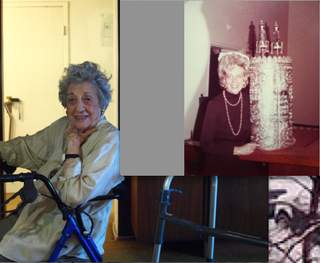 She was born the day Woodrow Wilson was elected to his second term—before women had the vote—and on the day after her 100th birthday voted for the first woman to run for president from a major party.

Florence was a remarkable person. If she was behind something, people were all right with it. If she backed you, you didn't care who criticized you.

She lived to a month short of 102, funny, elegant, canny, loving.  Read More
Be the first to comment

How do we live? 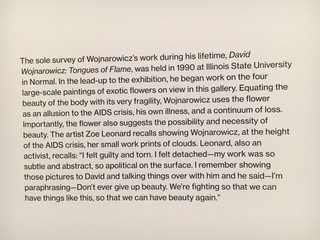 We have no choice to be fight, but sometimes it's tough to remember that we are people. Read More
Be the first to comment

I just learned from Hito Steyerl in her book Duty Free Art: Art in the Age of Planetary Civil War that captchas (Completely Automated Public Turing Test[s] to Tell Computers and Humans Apart) were not just random but were once used by Google to check scanned texts (Google Books) & addresses (Google Street View) for accuracy.  Read More
Be the first to comment 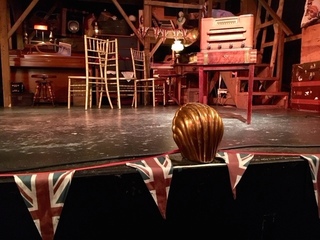 But the Gingold—we'll be back!  Read More
Be the first to comment 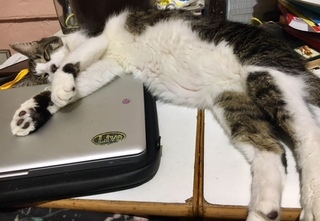 All my philosophy really comes from my cat.
A classic is a book that has never finished saying what it has to say.
~ Italo Calvino

Today [tomorrow as I write this] we read Ecclesiastes (Kohelet) in shul as part of celebrating Sukkot. We read this every year, & every year I am moved & provoked again. Definitely my favorite book of the bible, for both its poetry & philosophy. 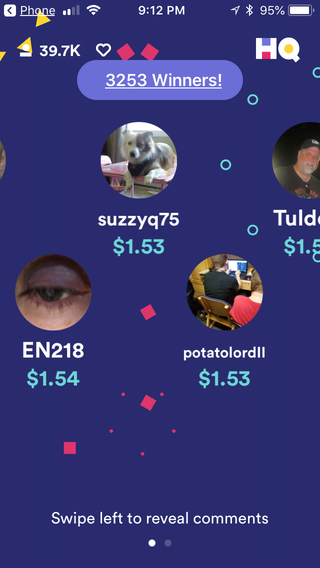 That's me: EN218.
Johnny finally understands that it's the glory not the cash that counts in HQ trivia (unless I were ever to take home the $100,000 winner-take-all pot).

When you win, all your guesses seem obvious, & your thinking sharp & quick (you only have 10 seconds to answer each of 12 multiple-choice questions—1 wrong & you're eliminated).

The winners split a $5,000 pot. They usually start out with half a million or more players & end up with anywhere from a couple hundred to a few thousand.

This was the second time in 6 months that I managed to make it all the way through. Now that they owe me $2.39 I may sign up for Paypal & collect. Read More
1 Comments

you beat the potato lord!

It's already 5 & yes, I've done the laundry, some farflung errands & a little work, but not the things I got up early to do. Oh right, I got up so early I went back to sleep till 10. Onward, sisters!
Be the first to comment 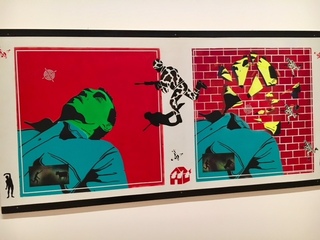 David Wojnarowicz: History Keeps Me Awake at Night, at the Whitney.
Such a great show—I joined the Whitney so I could go see it a couple more times (& see the Hoppers etc too). His paintings, photos, edge bring back the mid-80s, which never seemed so far away till I saw the docks & streets as they were then. Things never change all at once but they change totally, and in such a short time. I remember seeing him on 2nd Ave shortly before he died, already (& always) so far away.  Read More
Be the first to comment

who walked right out in front of me when I had the light & you didn't, causing me to slam on my brakes rather than hit you & skid in the light rain, in turn causing my bike to catapult & me to fly over the handlebars, while you went your karma-ugly way without a word or a hand up, you owe me $17 for the replacement brake cable. I'll wait out the sore wrist on my own.

I'm off tomorrow anyway for Yom Kippur.  Read More
Be the first to comment

Tags: Diane Arbus
“Everything is so superb and breathtaking. I am creeping forward on my belly like they do in war movies.”
~ Diane Arbus

Isn't this great? I long for that feeling of awe & surprise, which happens so rarely. But it could hit more often, right? What can I do to get it?

Also, happy birthday to Hank Williams, William Carlos Williams, & the other half of the Double Yews, Annabel "Annie" Lee.  Read More
Be the first to comment
Loading…}