Help me out, people. Which is a better slogan for my presidential run:

It's possible. [Which is a good response to the pesky questions about my past that may arise.]

First 10 people to answer are guaranteed an ambassadorship.

IT'S POSSIBLE A slogan both inspiring and ambiguous. It will look good on a tee shirt. Does my new job cost anything?I have a few bucks socked away. I'll take two (see below).

- a loyal friend, I want HUD and also an ambassadorship to Belize.

That's a good point. There's a small emolument, naturally, because what was ever good that was free? Congratulations, Madame Secretary Ambassadress!

If you're for it , so am I. But I'll probablably change my mind a couple times. I will take Sweden so I can have health care.

If you want Sweden, it's yours! (See how easy this is?) 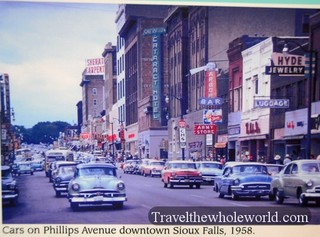 I couldn't find a photo of Tommy's but here's a nearby street, same era.
Someone asked a FB group I'm in, "You Know You're from Sioux Falls...," what stores people missed. Before I posted "Tommy's Friendly Grocery," I scrolled through & was excited that someone named Jerry had already mentioned it. We got in a conversation: turns out he grew up 2 blocks away and had gone to Lowell, Edison & Washington with my next-older sister. A vivid little moment of home sweet hyperlocal world.

Tommy's Friendly Grocery was the scene of me getting dumped by my first "boyfriend," Bart. (Not to be confused with the first boy I kissed, when we were lining up for kindergarten—I loved Michael S. because when he went out in the sun in the summer, he got deep dark the first day; this impressed me no end!)  Read More
Be the first to comment

I always thought it was gradual but it turns out there's a day with your name on it. You can duck it for a long time but then your day arrives. I'll remember it because it's my friend's birthday (also JFK's).  Read More
Be the first to comment

Tags: Jean Rhys
Reading makes immigrants of us all. It takes us away from home, but more important, it finds homes for us everywhere.
~ Jean Rhys

This might be my favorite quote ever. It totally gives me a place, no matter where or what or why.
Be the first to comment

Totally great to see a melodrama of Yiddish theater, The Jewish King Lear, by Jacob Gordin, written 1892, translated by Ruth Gay. Another play of his, The Kreutzer Sonata, (based on the Tolstoy novella) was the first Yiddish play to be translated into English. This Lear had a happy ending like the 17th-centure Nahum Tate version  Read More
Be the first to comment

I sat in the gravelly backyard at Unnameable Books, waiting for the reading to start, when I got hugged from the side—by none other than my niece Hannah, in town from Portland, OR. She decided to surprise me at my reading, since "if you post on Facebook, I know where you're going to be." What a great girl! In her honor I read a poem ("How Hans Became an American") that features her dad.

It was a pretty nice night—wonderful work from the young poet Tony Iantosca, & an interesting jam from musicians that included Eddie Berrigan, who I had dinner with beforehand. The day was gorgeous, too.  Read More
Be the first to comment

And so to bed 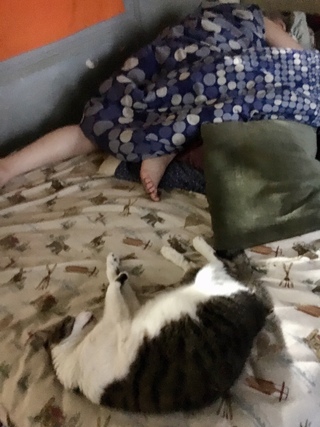 Sleepers: Buster 'n' me.
I always wanted to write a history of the bed, using Pepys's famous line And So to Bed as the title. If I ever do, I would talk about sleep patterns, like first and second sleep, and pillows (once thought suitable only for women in childbirth) (others put a log under their heads).

I was a good sleeper till Johnny made me aware of him every minute.  Read More
Be the first to comment 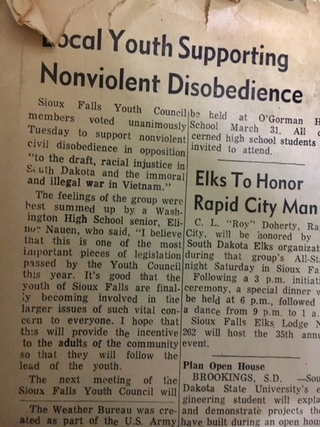 I was an activist all the way back in high school.

And early to understand the usefulness of a concocted quote. We wrote that, the few of us "radicals" who were at the meeting, but I was the only one who would put my name to it. "My parents would kill me" is what I remember everyone else saying. After this article came out in the Argus, I got hate & "turn to Jesus" mail from around the state.

I remember around the same time going door to door in a driving rainstorm trying to get people to sign a petition to free? reconsider? Thomas White Hawk, in the state penitentiary for murder. People were very polite to a bedraggled baby-faced teen but no one signed.

So many memories of my early activism. A girl in my class who declared that all the Indians were drunk. "And don't think I'm prejudiced. I'm not—it's true." A fund-raising walk (for Indians from South Dakota and India, if I recall correctly) I organized and walked the whole route in—on crutches. Sneaking out with my boyfriend Ken to drive to Vermilion to hear Julian Bond.  Read More
Be the first to comment

Tags: Barbara Barg
Oh damn, it happened so fast, oh damnit to hell Babs, what are you doing dying on us? I keep thinking of your sharp wit, your Arkansas drawl, your complete acceptance of who you are, your hilarity, how you made yourself into the charismatic singer of Homer Erotic, of you as one of the Joans of Arc in our play from 1979, of how rare & pleasing it was to truly surprise you, how long we've all known each other, another bit of the texture of our world thinned out. Yes yes I know it happens & will keep happening but so what. This is now.  Read More
2 Comments

Hi Elinor, it's Lenny Goldstein. I hope you are well. I read in the project newsletter that Barbara Barg died, then saw your blog. My condolences. I enjoyed the times I shared with her in various endeavors and recall them fondly now. She was always so kind to me. All the best (Hag Sameach Sukkot),

Hi Lenny! wow, good to see your name. Yeah Barg had a thoughtfulness that was very specific--she always knew something about YOU & it was always kind &/or admiring... Hope you are well. Email me if you want. Elinor [@] ElinorNauen [dot] com. Does writing it like that prevent spam? Who knows?

Every once in a while I am struck again by how totally great it is that there are endless piles of books that I haven't read yet. Great books, riveting books, illuminating books, books on subjects I'm amazed someone took the time to think through.

I once understood mortality to mean that life wasn't long enough for me to ever read Ivanhoe.  Read More
2 Comments

I go to library sales. Bags and bags of books. Some good, some horribly bad. I have a closet with piles of books . Jim doesn't get it even though he also is a reader. No Ivanhoe. Probably never.