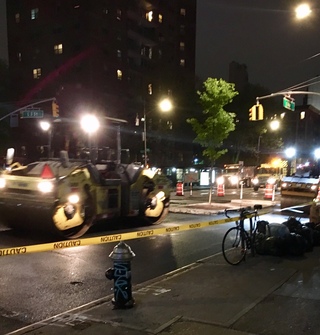 Paving First Avenue. Now they're putting down a zillion lines for traffic. I don't know what all those boxes & stripes are supposed to mean. Does anyone? (I'll try to remember to take pictures.)

Another treasure, the provenance of which is lost.

I once bought a lutefisk TV dinner for the plastic cover with its scan of the lutefisk & potatoes. I threw the food away many blocks from me.

Y'all know about lutefisk, right? Cod cured in lye, a Scandinavian "delicacy." My dad had his office in a small building called the Nordic Hall, where the Sons of Norway had their lutefisk dinners. I am here to tell you that lutefisk smells awful. I got Myron Floren's autograph at a Sons of Norway event. Only one person, my accordion-playing friend Rachelle, was every excited about this revelation.

I also had a book of lutefisk cartoons that to my chagrin has long since disappeared. The only one I remember was a golden-arches fast food McOlson's LutefiskBurgers, with the display "1 sold." (Oh my, there's one copy available at Amazon for $1,999.99. Free shipping!)

Please say you like lefse! Lutefisk is however disgusting. Did you know the Garretson/Jasper area has the highest per capita rate of Norweigans outside of Norway? This is an old factoid from a book by Feike Feikema / Fredrick Manfred from Luverne.

Lefse is OK, as long as there's plenty butter & sugar. I slightly knew his daughter Freya, a poet & very tall. Interesting about Garretson! 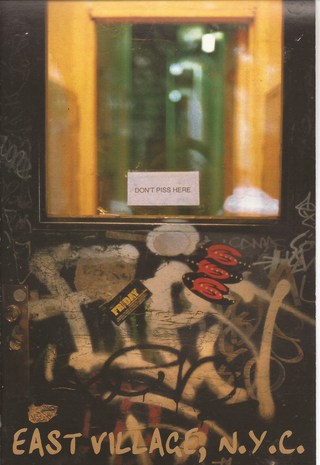 Finally found the postcard of our front door (see June 25). (Does this mean I can stop searching'n'cleaning?) Our super, Jeff, made the sign. I still am astonished that it worked. That was pretty much his entire success as super.

Jeff, not yet 60, is now living in a nursing home in Maine, his memory destroyed, I assume from HIV. The last time I spoke with him he didn't know who I was or any of our mutual friends. Several others have died & I think only Maggie & I still live in the Pound from those days. 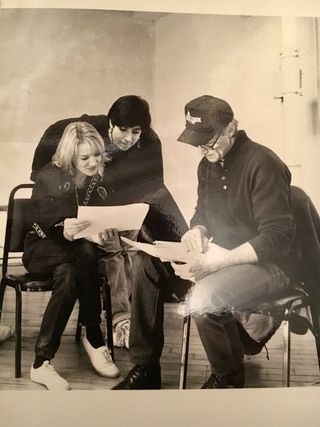 When Sam Shepard died almost 2 years ago, I looked high & low for this photo of him. Today I looked everywhere for a "don't piss here" postcard & found this photo. Alex was filming a documentary on Kerouac & Shepard was one of the people we interviewed. 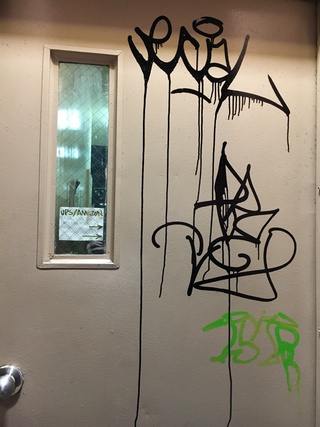 Not just the neighborhood, that’s my front door. The graffitti won’t be there long, if our landlord’s recent (fency!) past is anything to go on. Long ago, when the area was much less bustling, the super had to post a sign on our door: “don’t piss here.” Which worked, to my surprise. No one ever used our doorway as a urinal again. Someone made a postcard of the doorway. I’ll find & post it.

We all know that prime ministers are wedded to the truth, but like other married couples they sometimes live apart.
~ Saki

Seems like a good reminder as half the countries in the world seem to be choosing leaders, in one way or another.

Sunday in the Park with Robyn 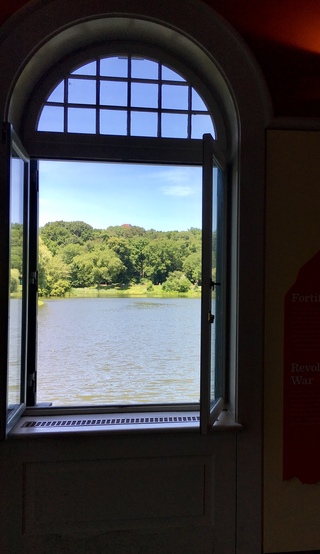 It's the summer of adventure! Robyn up for anything & today it was the Conservatory Garden. The neighborhood around the train hints at the East Village from my early days. The birds—wren? nuthatch? sparrow?—bathe with obvious enjoyment in a fountain. Something violet in a strip of white & red. It's OK that I don't know what I'm seeing. I see it.

The tree & the forest

When JetBlue emailed me to say my return flight from Ecuador had changed, I noticed it left Ft Lauderdale 3 minutes earlier than before & they had put me in a different seat. Much to-do later, I was all set.

The next day Willis pointed out that the flight was actually a whole day earlier, not just three minutes.

This year, there will be more people over 65 than under 5 for the first time in human history. One word: robots.

I miss being cute.

I miss believing everybody wants to sleep with me.

I miss not being the grownup.

I miss driving around and the only concern is affording gas.

You can kill a man, but you can't kill an idea.

Do young people know who Medgar Evers was? Mississippi civil rights activist, the state's field secretary for the NAACP, a World War II veteran. After the Brown decision in 1954, he was denied admission to the University of Mississippi Law School, but was instrumental in the eventual desegregation of "Ole Miss" in 1962. Assassinated. His widow spent 30 years pursuing Byron De La Beckwith, who'd been acquitted by an all-white jury—Beckwith was finally convicted 30 years later & died in prison, still an unrepentant segregationist, from all accounts. 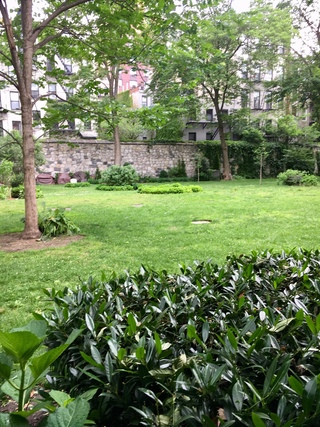 Marble Cemetery looking towards 3rd St, 8 a.m. today. I don't know that I've ever seen it so green. Every spring, the magnolia tree blossoms briefly & I wonder how many more times I'll see it.

Carolyn Maloney is my long-time Representative. She is effective, excellent on guns, healthcare, women's issues (& more), hard-working. Really one of the best people in Congress. She has a potential opponent in the next primary. Not terrible, but absolutely not an improvement. Ditto for my beloved Jerry Nadler, who was my Rep till they moved the lines—he's the most liberal Congress member & someone is challenging him too, claiming to be more "progressive."

Why spend time & money opposing someone good, rather than run for an office they might be able to win (Maloney & Nadler regularly win with 80-90% of the vote) &/or where the incumbent isn't so great.

Since tRump & AOC do people assume that they are qualified for/deserve any office they want? Why are Beto, Stacey Abrams, Hickenlooper, even Steve Bullock who I think so highly of, (et al) running for prez when they potentially COULD be elected to the Senate? Why did Cynthia Nixon run for gov when she could have won a city council or state senate race? Examples abound! Can anyone put party over ego?

Or country over ego?

Yes, country over ego. Yes, for sure.

The Most Handsome Stanton in Manhattan 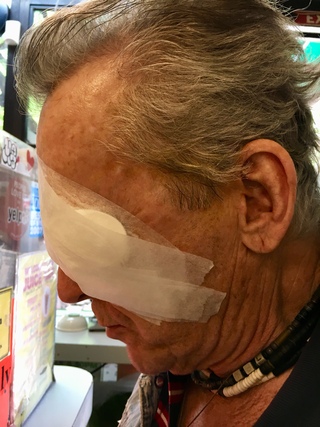 Even with his eye bandaged & feeling beat, he looks so good.

It was cataract surgery, which is not that big a deal, but when he was later than expected I figured they'd dropped a scalpel into his eye & he was dead. He suffers, but I worry & suffer, which makes it harder on me.

One of the qualities of liberty is that, as long as it is being striven after, it goes on expanding.

These are kind of the same quote, right? And somewhere a physicist is saying that the universe makes room for the stars... & psychiatrists, martial arts instructors, rabbis—they all have a version of this too, I bet. 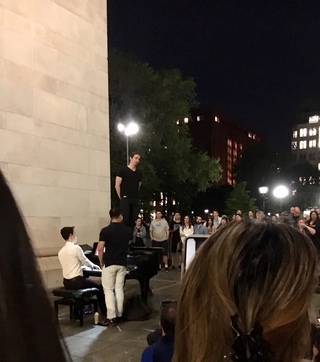 This is what makes me love my city: First came a party in an apartment with incredible views of the West Village & beyond, with food made by friends, a poet and his Ethiopian wife. The food is great but the best part is their warmth, how much they love hosting, & the array of friends from young to old, artists and who-knows-what who relish this annual invite. On the way home, I came upon people singing opera atop a piano, dozens of people gathered round. A balmy late spring night, feeling safe & stimulated in my beautiful town. 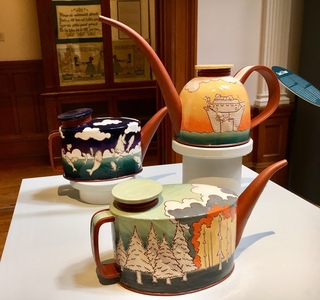 I think about the kind of person I would be if I owned something like these. Different from Day 1, is all I can say.

These were at the Swedish Institute in Minneapolis.

In the neighborhood: strange building on the East River 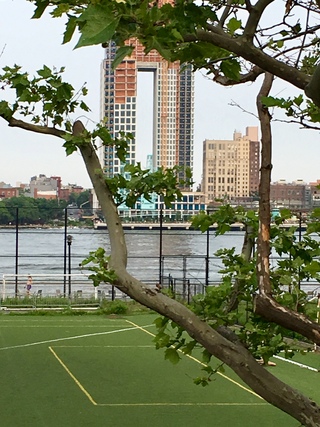 You can see this building from my corner & it always looks peculiar, like a narrow & high bridge, or 2 buildings connected across the top. We walked east all the way to the river trying to figure it out. Couldn't. Maggie took a picture from quite a bit farther south but makes it look entirely different—that strip in the middle replaced by several buildings of different heights. There's nothing unusual about it, & I don't think it's supposd to be an architectural puzzle, but it's managed to have that effect, on me at least. But wait, according to EV Grieve, it IS two towers and is going to look like stacked sugar cubes, as it is on the site of the Domino Sugar factory. 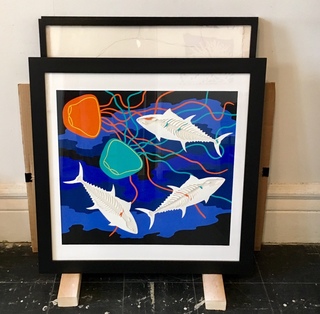 This was, overall, my favorite work of Linda's, which I saw at her open studio. More color than I remember, that's part of it, & I like paintings of fish more than reefs made of plastic netting found in the sea. This work integrates her love of & concern for oceans.

Her studio is in an old school building on Rivington filled with artists, theater & (I think) community groups. How great to have such high ceilings & a view. 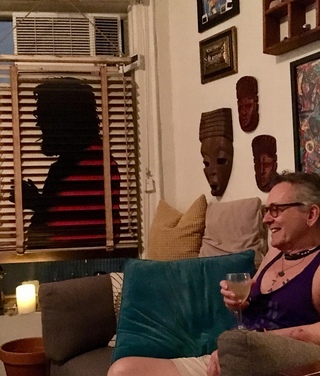 I’d only had a copy for so long that I’d forgotten what this wonderful shade, painted by Tim Milk, really looked like. It was nice to feel Ted in the room & of course nice to see Johnny with his big laugh, enjoying himself with Joe Carey & his girlfriend Stacy (who shares my birthday AND has many other wonderful qualities).

What would your good do if evil didn't exist, and what would earth look like if all the shadows disappeared?

My favorite quality in literature is that of being mysterious—you can't pull it apart & aha a final meaning.

What I'm not reading

I liked the first chapter of Sophie's Choice, the tough-but-sensitive young novelist in New York. But in the second, he moves to Brooklyn (making sure it's completely clear that he's NOT JEWISH but is charmed by the Jews' delightful vulgarity), where he refers to Sophie's "truly sumptuous rear end." That was it. I can no longer overlook that swaggering male woman-is-object gaze. This is the month of Denise Levertov & the men can blow it out their sumptuous ass.