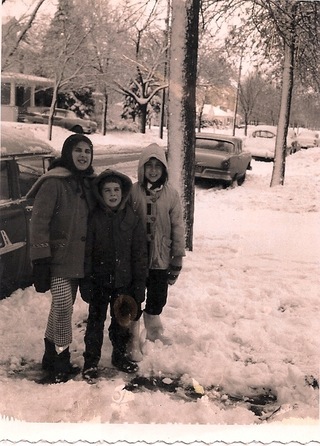 My sister Lindsay, my brother Charlie, & me (that's the same giddy snow-face I still have), possibly setting off to surprise Grandma Alice on her 75th birthday. We took the train to California & I remember having a hard time believing that two such different weathers could exist simultaneously.

Snow was falling, so much like stars filling the dark trees that one could easily imagine its reason for being was nothing more than prettiness.

As I've said many times, in New York City, snow pretty much is for nothing more than prettiness, & along with that, we don't have to shovel or drive, so its elsewhere drawbacks don't apply. I remember making igloos with the little girl next door (when I was a little girl, but she was littler). Ice skating at the park that they flooded every winter, a couple blocks down Summit from us. The purest part of my childhood has snow in it.