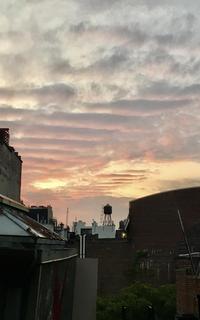 How'm I gonna stay up here all winter? My neighbor is going to get a little heater, so maybe I can do something like that. I have probably been outdoors more this stay-in summer than I have in years, thanks to the roof.

I've been making calls to Michigan voters (through a friend in Detroit). It's pretty fun—supposed to only be calling Dems & I only rarely get a tRump supporter, but I get off the phone fast & politely if I do. I've talked to a man who hasn't been outside in 28 weeks (asthma, COPD) & did I think his ballot would be OK if he handed it to his mail carrier. A woman who wasn't sure she could make calls because she might blow her top if she got a Republican on the line. Another woman, originally from Kentucky, who said the fact that her brother-in-law died of C19 hadn't changed the mind of any of her "racist, I hate to say" relatives back home. People are mostly nice. One young woman must have thought I was selling or scamming because she charged into a long silly story about her emu egg-cotton candy sandwich & then hung up. I didn't care, how else do I get a glimpse into the wackos of the world?

A little pitch for phonebanking: it's easy, they train you, your phone # is masked, it only takes an hour or so at a time, & I know I for one don't want to wake up on November 4 feeling I hadn't done everything I could. Click on this link! Or search for "phone bank for Dems."