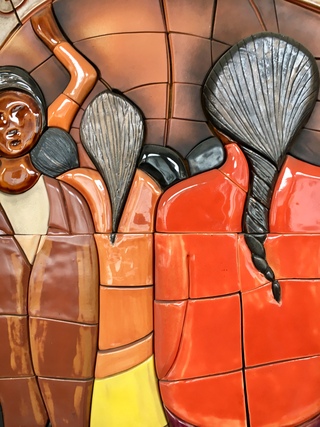 This is a snippet of a mural on a wall outside the governor’s palace or state building. Several walls insides are covered with portraits of provincial governors (all men, no surprise) going back at least 200 years (oddly, they don’t seem to be presented in chronological order except for some grandee types clearly from 400 years ago, all the way up at the top). There’s also an abstract ceramic mural inside, in shades of the rust & pink that make up most of the roofs of Cuenca.

If I could, I would post a picture of this whole mural, which I couldn’t stand back far enough from to take complete. In it you can see a panel of Panama hats, workers, corn and other ancestral food, doves, traditional occupations, and more, much that I don’t recognize.