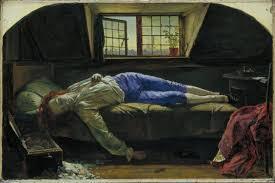 Some writers use pseudonyms: George Eliot, Mark Twain, and there are people who invent a whole separate person, an alter ego (Latin for "the other I"). In the literary world it's common: Chatterton attributed a series of poems to a 15th-century priest named Thomas Rowley; James Macpherson wrote the works supposedly composed by a 3rd century Scottish bard named Ossian (and incidentally gave a boost to Scottish cultural nationalism); Richard Hell wrote Theresa Stern's Wanna Go Out?, the KOFF poets gave us Maria (Surprise Surprise Surprise That's Not My Finger) Mancini.

I can barely think of a writer who hasn't fooled around with identity—it's part of what artists do: change words into poems, change personality into novels. We speak in the voices of Civil War veterans, Lord Byron, aliens. We become someone else in order to explore other lives, thoughts, ideas.

I edit the smallest magazine in the world, 16 pages, circulation 350. I ran a sweet 50-word story by a woman whom a few people believe to be an invention, & boy have I heard about it. They are not amused.

There's no financial fraud. The story was good, no matter the source. So why are they bugging? Why do they care? Is it that non-artists feel somehow cheated or fooled or that someone is getting away with something? Do they have no sense of humor? Do they feel like it's somehow a joke at their expense?

I really don't understand it. In art all that matters is if it works.
Be the first to comment
Loading…}