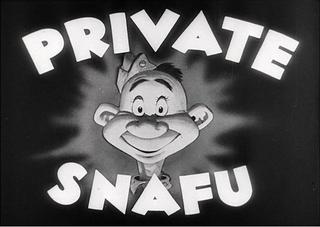 WWII serious fun
According to a wonderful article by Mark David Kaufman in the Public Domain Review (which finds & writes lovingly about all sorts of oddball bits from the past), 27 cartoons were made about Private Snafu, starting in 1943. They were intended to educate GIs what not to do: sleep under a tree without your gas mask, stick your rifle in the mud, & so on.

Frank Capra made the first ones; Chuck Jones, Mel Blanc, & Dr. Seuss also had a hand in them. According to Kaufman, Warner Bros. "independently invented the atomic bomb" in an episode that never saw the subdued light of a movie theater. The one I liked best was "The Chow Hound," about what happens if you waste food, narrated by a bull who joined up on the first day to provide food for Snafu.
Be the first to comment
Loading…}