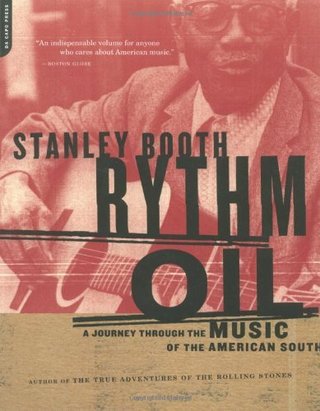 One of the best books on Southern music I've read is Rythm Oil, by Stanley Booth.

Not just music but the 1950s onward, what it's like to hang with musicians like Furry Lewis and his wife Versie, ZZ Top, and Keith Richards, or go to the funeral of Mississippi John Hurt as a sort of insider (he was asked to speak).

Booth is a good reporter & researcher: for example, this quote from a Memphis pianist about Phineas Newborn Jr: "He had a boogie-woogie left hand, a bebop right hand, and this... third hand." A good writer too, describing Newborn's style as that of Secretariat or the young Muhammad Ali. "He could think of things to do that no one else had ever done, and then he would do them." Maybe my favorite moment is when he says to Fred Ford, "I can't believe I'm sittin' next to the man who barked like a dog at the end of Big Mama Thornton's 'Hound Dog.'" And Fred Ford says, "I was gonna meow like a cat, but it was too hip for 'em."

Elvis, B.B. King, Janis and so many more are respectfully and appreciatively described. He knows his stuff! The Trumpeteers, man!