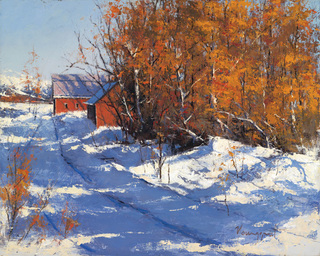 Snowed In, my favorite RY painting
Johnny's off to MoMa, while I'm drinking in Romona Youngquist. She's an Oregon-based artist who probably isn't as popular as she should be, at least not in the high-art world. That might well change, though. Weren't Chandler and Hammett, for example, (considered) hacks until they became (considered) great? It's certainly true that in the 1860s, the French Classicist painter and sculptor Ernest Meissonier outranked and outsold the likes of Manet, Monet and half a dozen other artists whose names we know far better now than the then–rich and famous Meissonier.

One interesting point in "Romancing the Landscape," a piece on Youngquist in Southwest Art [the caption links to it], was that she "sticks with a restrained palette consisting of about five colors: ultramarine blue, alizarin crimson, cadmium yellow light, and sometimes Indian yellow or cadmium red light, plus black and white."