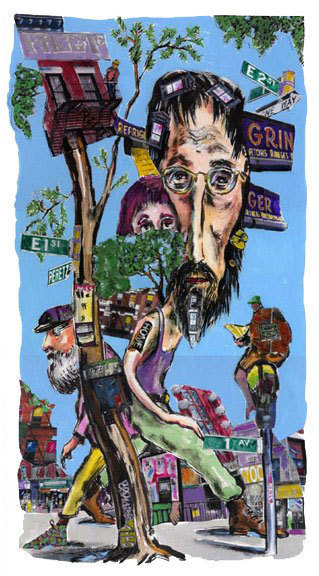 My block, photo-illustration by Robert Jay Kaufman; note the Gringer's sign (Gringer's is my landlord)
The reason I won't let the young folks carry my packages up the stairs (OK, one offered, once) is because I need to stay in shape to be a 90-year-old who goes up & down 4 flights.

I love where I live, on First Avenue between First & Second Streets. For its variety of buildings, people, & trees, Robert Jay Kaufman, author of Blockology: An Offbeat Walking Guide to Lower Manhattan, called my block his favorite—after walking all 1,544 of them below 14th Street.

I moved here, in 1977, because my apartment was cheap ($115/month). I had come to New York for the first time a few months earlier & was hit by a bolt of lightning-love: I knew that I was going to move here as soon as possible, live here for the rest of my life, & always feel the same way as I did in that first minute. It was the first time in my life that I knew something about myself that clearly.

I've always felt lucky that I found my place. Perhaps not surprising: my parents were both from large European cities (Berlin & Liverpool), even if they did live in South Dakota for 40 years & raise their family there. Don't get me wrong: I love South Dakota, I ache for South Dakota, the air smells better & more right there than anywhere else in the world. South Dakota is profoundly my home, but New York is where they let this "hick from the sticks" (something an old boyfriend called me) make a life.
Be the first to comment
Loading…}