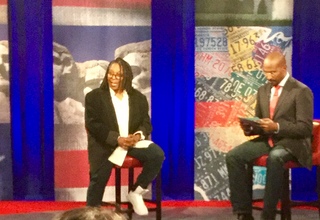 I was fortunate (thanks to my connections to the South Dakota mafia) to be in the studio audience last night for Van Jones's CNN show called The Messy Truth. The best thing he said was while all this recent activism & resistance is great, where was everyone when it would have meant something? While most of the people at the March probably voted, he said, did they volunteer at phone banks, go to swing states, raise money?

We were complacent, that's for sure, although Clinton's 93% chance of winning seemed like too much to overcome. And who really believed people would vote for a psychopath?

Whoopie Goldberg was warm & funny, and definitely tried to reach across the aisle.

The other guest was a lying dissembling conservative guy named Jeffrey Lord, who said he was against the ACA because two people he had run across "believed" that their loved one had died because of it. And that not ALL scientists believe in climate change therefore it's open to doubt. And that 166 fraudulent votes in California in 1998 somehow prove that there were millions this year. Shoddy thinking, to say the least.

I sat next to the pretty but humble-bragging and vacuous Munira Ahmed, the woman in the American flag hijab in Shepard Fairey’s poster.
Be the first to comment
Loading…}