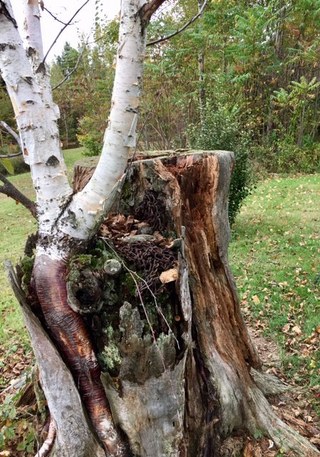 Maine has many birches, although this one was in Ed Foster's yard in Massachusetts.
There's this woman I was friends with when I lived in Maine but haven't seen for 40 years. I guess we only really knew each other a couple of years, although in one's 20s a year of friendship is a lot more than it is now. I lived not far from her sister when we Mainiacs were living at Idiot's Point in Prospect; she lived on Nantucket, still does, as far as I know, but came up a lot.

The thing is, even though I very well might not recognize her on the street, I can't forget her birthday. It's not something I try to remember: birthdays stick to me like thistles. Always have. It was my big party trick but thanks to Facebook it's no big deal these days to know everyone's birthday. I always try to think how I could make money in a bar with my idiot savant talent. Any ideas?

And yet, obsessed as I am with birthdays, the only poem I could recommend for my sister to read at a birthday party of a couple both turning 60 was a variation of Ted Berrigan's immortal: