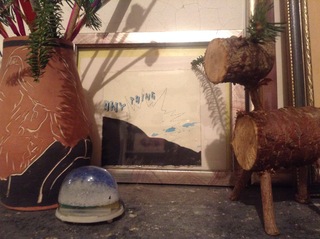 Arrangement with Ted, fireworks, snow globe, & reindeer.
It suddenly occurs to me that I am fond of snow globes mostly because of the word "snow" in their name. If they were called "picture shakers" or something like that, I wouldn't care.

I was in the security line at the airport a couple of years ago, & the sign along the way warned us that snow globes were not allowed in carry-on. Maybe we were supposed to already know that guns and explosives weren't, because the only specific caution was for snow globes. I asked the guy checking tickets, who finally saw my point and kind of laughed but had no explanation.  Read More
Be the first to comment
Loading…}