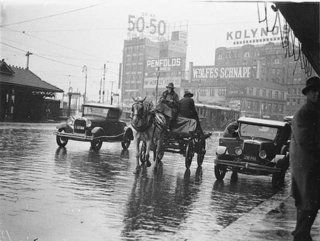 None of these is a Porter, but it's the general idea, & I liked this photo. In the clip's first minutes on the used car lot, note how physically similar Jerry VD is to his brother.
With the death of Jerry Van Dyke I'm reminded that he starred in My Mother the Car, the show that TV Guide called the second-worst of all time, after The Jerry Springer Show. I guess my family (or maybe just my dad) had a corny sense of humor, because I remember us watching it with some amusement, although it's highly possible that my memory is suspect. (Not a general admission!)

Almost the first conversation I had with Johnny Stanton was about that show's title. I was outraged at his claim that it was My Mother-in-Law the Car (on the grounds that  Read More
1 Comments

Olden days are always golden days. its good story thanks for sharing https://youtu.be/Z-4m9Ahqt6U