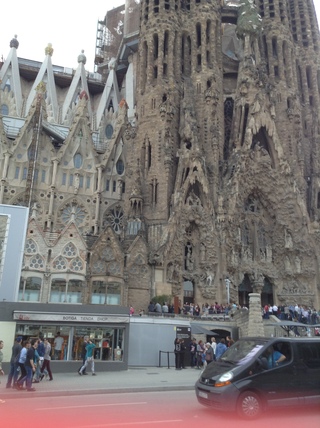 La Familia Sagrada
So much of Barcelona is about Gaudí, of course. His architecture professor said, We have just graduated either a madman or a genius. His genius lies as much in getting someone to pay for his crazy schemes as the work itself. It still seems so far out—I can only imagine how it struck Spaniards of a hundred years ago.

A Spanish friend told me this afternoon that the Japanese tried to buy this giant unfinished cathedral, with the intention of dismantling it, shipping it to Japan, and recreating it there. I couldn't find any confirmation of that but did learn that "Japanese general public discovered Gaudi in 1980 by an advertising film made in Park Güell, for the Japanese whisky mark Yamasaki, of the Suntory group close to Osaka. And since then the Japanese invade Barcelona."

Still a little jet-lagged, more on Gaudí to come—this wasn't even my favorite of his buildings. Read More
Be the first to comment
Loading…}