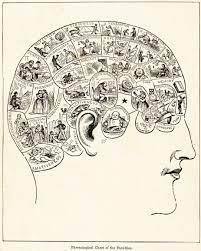 I ran into phrenology recently in Walt Whitman: The making of the poet, by Paul Zweig. More quack science? Phrenology is the study of the skull to understand mental faculties and character traits. It was very credible to such 19th century thinkers as Hegel, Horace Greeley, Horace Mann, & many others. Whitman saw a connection between his "chart of bumps" & his poetical character and used phrenological concepts in his work; Fowler & Wells, leading phrenologists, sold the first edition of Leaves of Grass in their store & published the second.

I can't help but wonder if a century from now people will look at psychology as we do at phrenology, a big advance in many ways but largely worthless.

Here's a terrific article on a modern study of phrenology. While it couldn't find any correspondence between the skull & what's inside, it did find "a very strong positive association between the trait "amativeness" (the arousal of feelings of sexual desire) and "words." Which is to say, the more sexual partners a person has had, the higher their verbal fluency in a word naming task.

This is part 5 (the final one) of a themed week on the blog. I was feeling like I've been spinning my wheels here & am eager to try something new. Love to hear feedback or ideas.