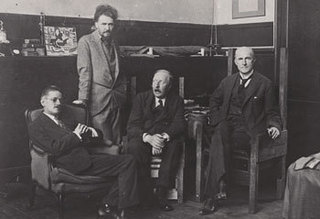 Joyce, Pound, FMF, random dude (some rich guy, says Johnny)
My favorite novel is Parade's End, by Ford Madox Ford. I re-read it every couple of years and about it occasionally. Even though we own 3 copies, Johnny got the Everyman edition out of the library, with an intro by Malcom Bradbury. He mentions several WWI novels, most of which I'd never heard of, among them Futility by William Gerhardie, Disenchantment by C.E. Montague, R.H. Mottram's Spanish Farm trilogy, Death of a Hero by Richard Aldington, Middle Parts of Fortune by Frederic Manning (originally published in 1929 by "Private 19022," so incendiary was it), and Read More
Be the first to comment

Does anyone know what time it is?

Tags: watch, dinosaur
I’m wearing an orange watch with a T-rex face that a young poet who was in my 2011 workshop gave me. A good poet with odd & brilliant synapses. Neither of us can figure out how to set the time.
1 Comments

Tags: Inuit, Greenland, Jean Malaurie
"No one had any money left. X kept coming to see me all the time, I noticed—and then, one day, he stalled more than an hour until finally he told me what was on his mind: he would offer me his wife in exchange for ten Gauloise cigarettes." —The Last Kings of Thule, Jean Malaurie Read More
Be the first to comment

Tags: Fringe Fest, galleries
I wanted this blog to be the means of encouraging myself to do stuff like go to the theater and look at paintings. How'd that work out? I missed the entire Fringe Festival this month both here & in Scotland, where I was invited by my cousin Meg—who is from Aberystwyth, Wales, but lives  Read More
Be the first to comment 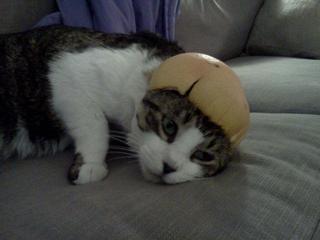 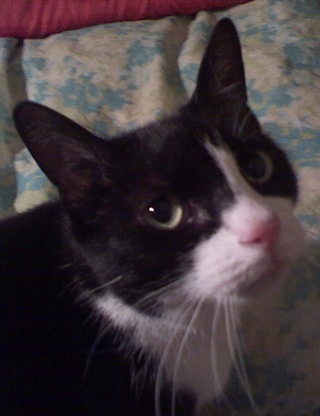 Dante
The one who loved me
Be the first to comment 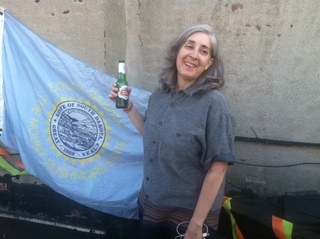 Nils, who I went to high school with, gave me this flag (photo by June Hony)
I was born & raised in South Dakota, and am a big booster for the state to this day. Since there are so few people who live there (half as many as in Manhattan alone), I suppose I feel SoDak needs me on her side. Otherwise, people tend to assume it's still a Wild West: Did you have electricity growing up, I've been asked. My husband grew up in Manhattan and calls himself a "New York provincial," saying being a kid trumps being a kid in any particular place. Read More
Be the first to comment

She done her in

Tags: trainer, Exercise
I already almost couldn't walk for the last two days, thanks to intermittent bum knee(s), but my brilliant, wonderful, skilled, supportive trainer Jill—who is her own best advertisement, wow—got me through an hour of mostly upper body stuff. What fun to work out down at the track on the East River, on one of the nicest days imaginable. Just hope I get stronger & not break into a million pieces.  Read More
Be the first to comment

Maybe when you compliment a person for being tolerant, it’s just that his prejudices don’t clash with yours. —March 11, 1969

Tags: East Village
I've lived at the Pound since January of 1977; Maggie since the fall of '79. We named it because all those pretentious buildings had names—the Van Gogh, the Burgoyne—why not our tenement? The Ezra Pound because we like saying we live at the Pound. The Pound now has a Wall of Fame on the top floor, to honor its famous and infamous residents. A lot of artists have lived there and a few ne'er-do-wells. Not Ezra Pound, however.  Read More
Be the first to comment

By way of intro

Tags: high school, Sioux Falls
In high school, I wrote a column, called NauenThen, for the school newspaper, the Orange & Black. My two-years-younger brother went on to write NauenAgain, and my youngest sister didn’t write NauenForever. Forty years later, it occurs to me to revive that rubric for a more frequent outpouring. I’ve been wanting a deadline, to take a stand, to be interesting. Let’s see how it goes.  Read More
2 Comments

I remember NauenThen, not well, too many yrs have passed, wasn't the office across from the big study hall? Oh well, not important. Just remembering how easy it was to take a stand in 69 & 70. And no one call our "stands" the bigotry of our generation.

Hi Oliver, thanks for commenting! I could probably still walk to the O&B office without missing a step, but I know I can't say how to do that or where it was exactly. I suppose you're right—people could disagree without getting apoplectic.