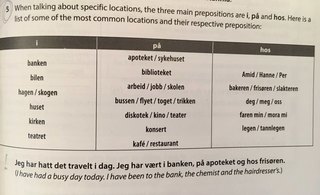 Prepositions are crazy in every language. Norwegian, for example, has different ones depending if you are talking about continents, countries, cities (i); directions (for); or islands, parts of cities, or individual mountans (på). And those are just some of the prepositions of place. A couple of people I know who are almost natively fluent in a second language still make mistakes. Someone explained that prepositions are difficult because there are so many of them & each can have many meanings & nuances ~ they've been in use a long time & had plenty of chances to mutate. And they're not consistent. We're on the train, Germans are in them. We read books by an author, while in many countries books are from a writer. My teacher said a woman dropped out of her class explaining, I have met the prepositions, & the prepositions won.