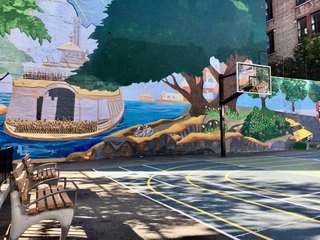 I sat in this park way on the Lower East Side (Grand Street between Jackson & Madison) waiting for my appointment in the mammogram truck. My city council member Carlina Rivera had arranged it. It took a while because the truck was in a bus stop waiting for a spot on Jackson, which turned out to be too skinny for the city bus to get by, so the truck ended up back where it began, 2 hours later. But Carlina & her husband, Jamie, came by with their dog Toshi, Carlina as warm as ever. The people who want her gone think she wants to destroy the East River Park. Is her plan the best one? The people who understand the engineering of this narrow, threatened strip of land disagree. And who "wants" to destroy a park? I didn't ask her about that. She hugged me hard when I told her about my mom. A beautiful early fall day.