Out of the neighborhood 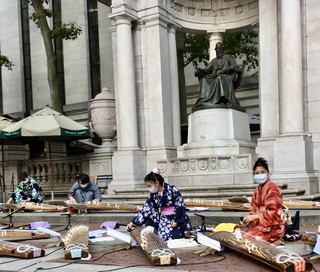 Possibly the most impressive part was that they played the whole concert sitting seiza. I know the woman on the right from karate.

What fun to wear something other than a t-shirt & go farther uptown than I have in a year. So strange to get on a train & have to think about what stop, which end of the train—my usual givens unfamiliar. Loved meeting with friends at Bryant Park to see someone from the dojo playing a koto, a Japanese harp. New to me. I wished they had explained what was involved in learning & playing it so I could appreciate it better. Didn't dig the Japanese banjo. I like bluegrass but a 7-piece banjo band playing almost in unison, not so much; definitely needed a guitar, fiddle & a tragedy. That's my uneducated Western ear & bias, obviously, & I know some people were wowed.