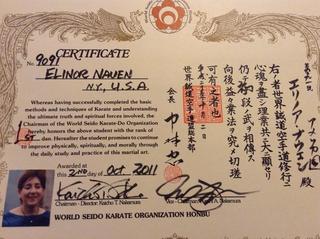 I also didn't know balance had anything to do with karate. I had gone through a tough time for a couple years as one of the care-partners of a friend who died of cancer in April of 2007. Even though Maggie, my best friend, had been studying for a while, I didn't really know what she was up to. But shortly after Roberta died, I woke up and realized: I have to study karate. I'd never had any interest in martial arts but somehow I just knew that this was what I had to do.

From thinking that karate was how I could punch out my grief, it expanded to become an extension of my spiritual practice in Judaism.

There's a famous Hasidic story that sums up why and how I'm observant, by which I mean that I pray/meditate regularly and follow Jewish law in most aspects of my daily life. The story is that a certain rabbi/teacher carried two slips of paper, one in each pocket. On one he wrote "for my sake the world was created" and on the other "I am but dust and ashes." He would take out and read one or the other slip of paper, depending whether he needed to remind himself to be bold or to be humble.

It's when I think of those pockets that I think that balance is in fact important. There are times when I need to feel that my life has meaning and value, that the work I am doing is necessary; and there are times when I have to be reminded that I'm not always right, that I'm not entitled to everything just because I want it. Those slips of paper remind me that I am small and mortal, but while I'm here I am part of the world as much as anyone else. Sometimes I wonder if I live most mindfully in that gap between the feeling of entitlement and the knowledge of unworthiness: the gap (or gulf!) between the person I am and the person I would like to be. It's painful—and productive—when our expectations face disappointment, when our hopes and the ideas we have about ourselves don't match up. So perhaps balance consists of being aware of and trying to close that gap—to find harmony between what I should do and what I can accomplish.

I don't find this easy! I ask myself constantly what I am here to do, if it's important, what's a good use of my time. Am I doing enough to help (to "repair the world" is the Jewish phrase)?

Varda, Todd, and I took a taxi to the Municipal Building and walked out onto the bridge. Todd explained that the best cable to climb would be the one facing Manhattan, up to the tower closer to Manhattan.

The start was easy, even in the dark. There was a little gate that we clambered around and then we were on the cable. The cable—which is 15 feet in diameter—comes right down to the walkway and is big enough around that when you're standing on it in heisoku dachi, your feet are almost level. Waist-high wires to hold on to run the whole way up. After all, for workers these cables serve as catwalks.

In my head, I could see that this was not dangerous, given the hand rails and the size of the cable. That and the fact that I was doing this with a man who had climbed dozens of bridges in dress shoes.

But it still felt scary as all get out.

We took a step, and another, and there we were, standing in midair. Not standing: There we were, taking one step after another, farther and farther from solid ground. I don't think I have ever felt such a disconnect between what I knew to be true (safety) and what felt true (danger). I should probably mention here that ordinarily I have no fear of heights—I had jobs in my 20s as a roofer, including working on very steep church roofs. And yet this was such a strange and new sensation: to be a needle suspended in an invisible haystack.

We kept climbing. I didn't look down, I didn't look around, I looked at Todd's feet in front of me. After an age, we got to a ladder that led, in a dozen or so metal rungs, to the platform of the tower. It was huge! Far bigger than my apartment. I remember a Coke can; to someone, being up here was so routine that they drank a soda and abandoned the can. I also remember that it was the best view I have ever had of New York City: lower Manhattan's unblocked night skyline.

Eventually we had to come down, of course. Back down the ladder, back down the cable. After a few yards, I realized that I had done everything I was going to do and was only retracing my steps; I realized there was nothing else to fear: So I looked around.

This was totally disorienting, the closest I felt to falling, since I was moving on that crazy angle. I stopped short and then looked around again, and it was the most exhilarating feeling ever. I really was standing on air, with nothing but the soft night around me.

Soon we were back safe and sound on the walkway of the bridge.

That climb led me to see that you can be aslant yet still balanced—if you know what you are holding on to. To me, balance means figuring out where to stand among all the competing spots: the ones where I might tumble and the ones where I might have equilibrium. The more I think about it, the more I realize that I am always searching for wholeness and yes, balance. I am a poet who makes a living as a science and health writer. I am an observant Jew who very much lives in the secular world. I am a married woman who went on my honeymoon with my best friend, because my husband doesn't like to travel. Standing on the sky that day, I began to see that what might seem like imbalance can be balance, as long as I remember to breathe, punch and hold on.

The summer before last, my husband was mowed down by an SUV and spent many months going through surgeries and rehab. While I was relieved from the first that he had no internal or head injuries, it was very stressful. I worried about his having permanent damage, I worried about money (the driver originally gave an invalid insurance card to the police, which started a long and torturous chain of problems for us), I worried that he wouldn't be able to walk well enough to ever come home to our fourth-floor walkup. I worried a lot.

But I didn't go to the bad. By 2012 I had learned to breathe. I had learned to punch. I had learned to hold on. I may have been knocked down seven times but I got up eight. I've learned that I can go through a lot of trouble and I don't have to let it do me in. Thanks to my karate training and my Jewish practice, I have found a place where I can stand on air and still be grounded.