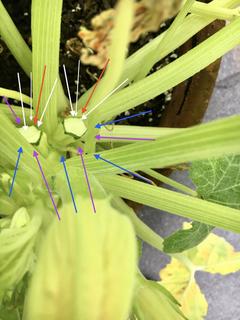 See? The handy arrows should make clear the nubs of our treasures.

I've been disgruntled that so many people don't believe in the pandemic. My friend said if they don't know anyone who's died, or maybe even anyone who's been sick, it's theoretical. And I raged that you shouldn't have to have imagination to believe what's going on around you even if it's not happening to you personally.

That was before the fiend ate our two prize zukes right off their stems (stalks?). All of a sudden the things people had been telling me ("all we got was one raspberry") or I'd been reading (such as the devastating yearly plague of locusts in Giants in the Earth, the wonderful book about Norwegian immigrants to South Dakota that I've been reading nightly on the roof) struck me as real. Up till now I just nodded: what did pests have to do with CityGirl Nauen?

Will it make me less grouchy about Covid deniers? Probably not.

Also, I bought some spray that's supposed to repel not just squirrels but deer, rabbits, raccoons, porcupines & armadillos (& some critters I don't know what they are).

Yes, the amount of delusion in response to COVID is mind-boggling indeed. Looking like Florida is going to be the next epicenter.

Oh George, please do take good care of yourselves. My mind may never unboggle.

"Giants in the Earth" is one of my favorite books that I have given to many people to read.