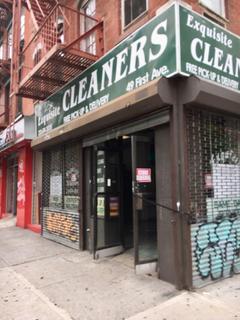 After 30 years, the dry cleaner/tailor is folding up shop. Not my place (only because I don't get anything dry-cleaned) but my block. It's hard not to wonder what the city will be like in a year or two. A friend of a friend of my sister's is leaving what she called a "broken" city. When I moved here at the end of 1976, my boyfriend's employer, the City University, would let him know when it was OK to cash his paycheck. It was soon after the famous Daily News headline "Ford to City: Drop Dead" & the city wasn't getting the life support it needed. It was fiscally embarrassed, anarchic, burned out, dangerous—and exciting! We've been down before & millions of people came or stayed, and worked their asses off to improve their lives & that of New York. We've done it before & we'll do it again & people who don't want to be here? Don't let the door hit you in the ass on the way out. I still ❤️ New York just as much as I did the first day I arrived & felt instant, enduring love.