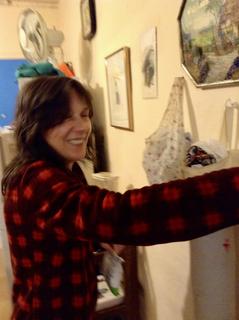 I don't know why I haven't written about her & her work more.

Our origin story: We were both taking Jim Brodey's workshop at the Poetry Project in 1977. At the end of the first or second session, I went up to her & said, "You're the only one who wrote a real poem. Want to be best friends?" I will never know what possessed me to say that. I knew NOTHING about poetry but somehow I knew that's what we had here.

She said, "How about we go have coffee." So we did, along with this guy Charley, who was bantering like mad, & by the end of the night, without saying anything, we had settled the terms of our friendship, & it's been that way ever since. Now we live in the same building & until last month were in & out of each other's apartments all the time. (My recollection is that we named our building The Ezra Pound because we liked saying we live at the pound.)

Her new book, Brokedown Palace, is brilliant. Buy it!

I just stumbled on this terrific interview in the Believer from a year ago that somehow I never saw till now. But it was Apollinaire's grave at Pere Lachaise—"a modern grave for the first modern poet," I remember thinking at the time, with its jagged & large rock headstone. I think we also went to Mt Parnasse, where we stole flowers from a nearby grave & left them on Baudelaire's grave with a note: From the poets of New York to the Poet of France.

The Ezra Pound lol. Love it!