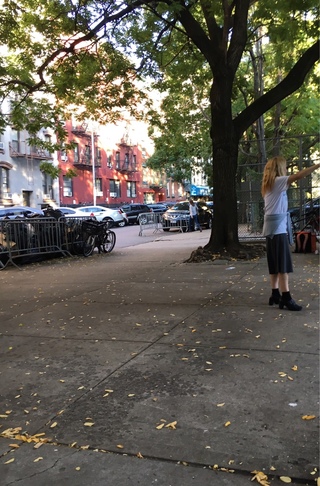 I sat on 5th St half-hearing then listening to (& recording pages of) this woman talk for at least half an hour (& I left while she was still on the phone). She was addressing "Detective" & telling a incident-filled tale of woe: her apartment broken into & art stolen ("I'm a well-known artist & surrounded by a lot of celebrity stuff"), which unfortunately wasn't identifiable ("people who sign their drawings are not serious artists"), her elderly parents were in the hospital, her bank account defrauded, her building broken into, her boyfriend Derek Jeter was wildly jealous ("he flipped out when any man came near me") but the Yankees didn't respond when she complained about his behavior, she also does bigtime corporate design work & was a prodigy ballet dancer ("I'm in better shape than any of them").

I sort of imagine the detective putting the phone down, going off for coffee, or maybe playing games & throwing in uh-huh occasionally.

Do I sound as crazy as her when I tell people I divorced Derek Jeter & am happily remarried to Didi Gregorius?