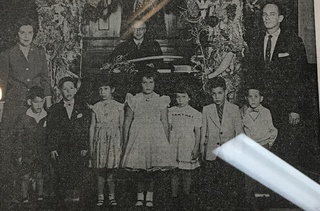 Mt. Zion Temple in Sioux Falls, South Dakota, celebrated its centennial this weekend & my sister took this picture of a newspaper article about Sukkot on the prairie.

It's hard to write a light account of a bad week. There was Buster (who's doing better! long saga); & September 11 anniversary (for some reason more talked about this year than of late); a friend with a sudden (benign!) brain tumor (diagnosed the day before they were leaving on a month-long birdwatching & Galapagos trip) (she had surgery the next day & seems like it'll be fine); & a horrific gun/domestic-violence tragedy involving a family I'm tangentially aware of (too awful to be in this list except as part of a tough week).

Well, there was one little bright spot (right): Yours truly as a member of the largest consecration class ever at Mt. Zion. It's pretty easy to tell which kid grew up to be a pawnbroker, isn't it? I had a crush on him when I was 5 because he tanned so dark & fast. What a great trick! How'd he do that?