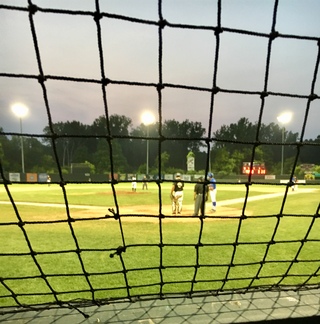 Fantastic to take the great Ed Foster to his first-ever baseball game, & to sit in the first row. He understood it more quickly than any other newbie I’ve gone with. (I often think about Endi, from Sarajevo, who stared fiercely for a few minutes & then announced, “I understand! Nine against one.” He sat back smugly & didn’t pay attention until he suddenly noticed that the bases were loaded. Which confused him to the point where he lost interest altogether.) Ed, though, never took his eyes off the game, asked a few questions (he started at “which one’s the shortstop?” but pretty quickly was asking sophisticated questions that showed he really grasped what was going on) & immediately put on his souvenir t-shirt.