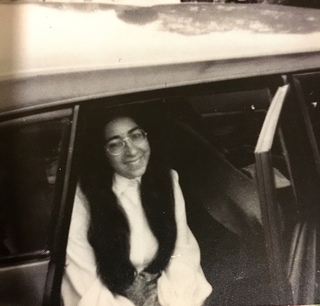 Me in 1971, smiling because I love being in a car more than anywhere in the world. We were all going to Merry & BC's wedding, wearing our only fancy clothes. I had just learned to drive a stick.

I had an appointment with my accountant a couple of blocks away & my driver's license expires on my birthday (MONDAY)—it felt great to combine two errands. I went to the DMV Express on 30th Street & was in & out in less than 20 minutes. AND everyone there was super-nice.

I asked if I could keep the old picture, which is far & away the best official photo of me ever. Chivaun glanced at it—that one from 20 years ago? Nope, you're upgrading to real ID (so I can fly with a dl) & it requires a new photo. She took a great one! She turned her screen around to show me. Wow! I said, that's great, I look like a terrorist! Her eyebrows shot up. I mean, I said, someone who would terrorize her husband but not anybody else, OF COURSE. I really just meant I looked like a wanted poster, but casual. Oh gawd now I'm probably on some damn list.

The lady I paid wasn't as jolly. Enhanced? No, that makes me feel like I'm getting plastic surgery.