From the vault: The Journal of Juan de Friscon 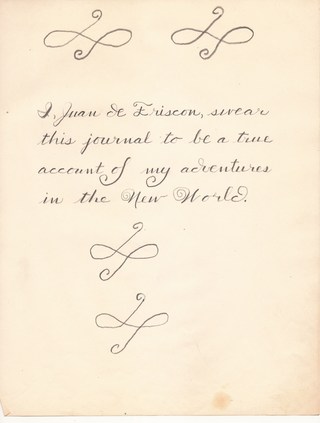 I used that elaborate handwriting throughout & can still do a version of it.
Oh my! This was a project from when I was in sixth grade. I just found it in a box. I remember it well, although I had no idea it still existed.

It begins with a typed letter telling a museum director in Ohio about the "major discovery" of a cabin boy's diary in a waterproof container in Panama. Clearly, it's real, the letter insists, because his description of Balboa matches the historical record. (The fact that it was written in English had no bearing, it seems.)

There follows 12 pages of Juan's adventures, followed by a bibliography: The World Book Encyclopedia, the Encyclopedia Britannica, and Understanding Latin America.