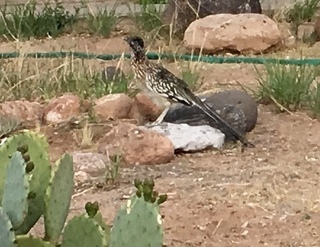 This would look more like the roadrunner you expect if its tail was up.
There's a lot I love about Albuquerque, & I had a fantastic time eating New Mexico food (cheese enchiladas with onions!), seeing ruined pueblos & churches, breathing the piney air, seeing a roadrunner! I have much to say about all of this & I will.

In that regard, it was the best visit ever. We caught up & more. We aren't, in a way, natural or instinctive friends—he was originally my boyfriend's roommate & it took me a long time to appreciate him as one of my closest friends.

I have to get ready to go to a wedding, so this will have to suffice for now. And maybe I'll never be able to put my finger on the heart of our friendship. Instead, I'll tell stories about our adventures together & the bond (& irritation!) of depending on one another that developed.
Be the first to comment
Loading…}