Could I love NYC more? II 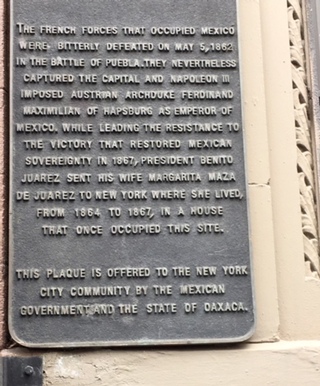 According to this article, Emma Goldman lived next door. I will have to go back & look for her plaque.
I came across this plaque on East 13th St, a little hidden behind decorative ironwork, which is possibly why I hadn't seen it before.

Here's the text:
The French forces that occupied Mexico were bitterly defeated on May 5, 1862, in the battle of Puebla. They nevertheless captured the capital and Napoleon III imposed Austrian Archduke Ferdinand Maximilian of Hapsburg as emperor of Mexico. While leading the resistance to the victory that restored Mexican sovereignty in 1867, President Benito Juarez sent his wife Margarita Maza de Juarez to New York, where she lived, from 1864 to 1867, in a house that once occupied this site.

Since I leave off blogging on Saturdays, I can't post this on the 5th. A day ahead will have to do.
Be the first to comment
Loading…}