Where we read now 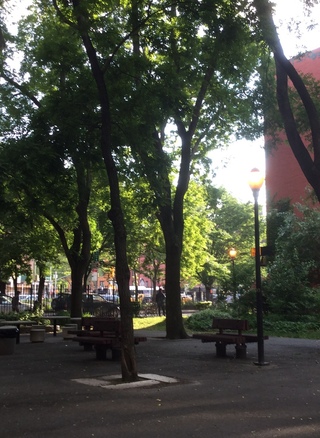 Meltzer Park.
From the street, Meltzer Park isn't that appealing. It's mostly paved & the benches are fixed in blocks. But inside, it's cool, breezy, shaded, & empty. Also, it's a block away. This is where we'll spend the summer reading poetry.

We started with Inger Christensen's wonderful Alphabet, but I'd lost our place and left it at work, so we decided to spend time with A.E. Housman's A Shropshire Lad. I'd thought he was pretty but he's sophisticated in his rhymes & deep (in a youthful but hard-charging way) in his philosophy. He is considered to be one of the greatest scholars in history (true?) & he was in love with a schoolmate, who was heterosexual but they remained lifelong friends, which seems to be rather mellow for the Victorian era. But what do I know.
Be the first to comment
Loading…}