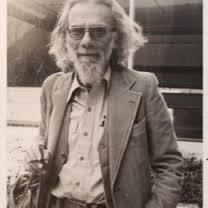 Happy to have been present at the Poetry Project for the launch of Lessons: selected poems by the late Joel Oppenheimer (1930–88). He was underappreciated in his day & is neglected now, with most or all of his books out of print, so it's particularly wonderful to have his substantial collection.

Joel was a big reason I moved to New York. I was living in Maine, at loose ends, while he summered there. He famously didn't drive & I was a car guy, so somehow I ended up driving him around. He was more than 20 years my senior (to the day!) & I see now was amused by my being eager, intelligent, & a blank slate. He told me I should be a poet, & if I was going to be a poet I should move to New York. So I did, just like that.

I remember lots more that he said & now that I've outlived him, I can tell you he was right about everything.

Anne Waldman spoke beautifully about him as her first-ever boss, when he was the first director of the Poetry Project, & how non-sexist & respectful he was. And I realized that yes, that was it—he encouraged me to express my uneducated opinions & then treated them absolutely courteously. Which has enboldened me ever since.
Be the first to comment
Loading…}