From the vault V: The Brave Little Poets 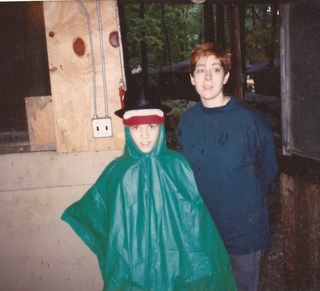 Joe & me, the only photo I have of this trip. I loved that hat.
The Brave Little Poets Go Camping

I wake up early. It’s raining. I call Peggy to ask hopefully, Is anyone having second thoughts?

I’m not, she says briskly.

Why’d I think Miss Camper 1990 would be braked by a little rain?

Johnny’s still asleep. You’re all crazy, he says grumpily when I try to wake him up.

I call Marion. She’s English so she must be sensible. But Marion is as jolly as I’ve ever heard her.

Have you looked outside? I ask.

She says, I knew about the rain yesterday, but I didn’t say anything. It’s like an English morning!

I now feel like a total wimp. Am I really the only one who wants to stay home, stay inside where it’s dry and warm and there’s fresh coffee?

One last household. Eddie answers the phone. I’m going if I have to walk! he announces. Why is everyone talking in exclamation points?

Johnny leaves it up to me. Peer pressure makes me start packing. I pack a flashlight, a towel, thermal underwear, flannel pajamas, thick socks, more socks, another towel, a silk undershirt, a sweatshirt, five blankets, a down comforter, two notebooks, and four books (the limit for each of us, given that it’s eight people with all their gear in two small cars). We also have a case of red wine that Johnny and Doug picked up—their pre-camping chore I, the driver, seemed not to have any chores. I guess I fell under “Johnny, wine.” There’s a case, except Johnny drank two bottles last night. I had a glass but fell asleep and spilled it on the bed. If this year is anything like last, everyone will be very proprietary and greedy about the wine, and no one will ever be left alone with it.

Peggy comes over, we stuff our gear into the car, pick up Marion and Joe then meet Johnny at Alice and Doug’s. It’s still raining and both cars are fogged in. We lose the other car on the DFR Drive in about two minutes, which is fine as we have the wine, the corkscrew, and the directions. I go really slow for a while but they never catch up so I figure the stomachs (Johnny and Eddie) have stopped to eat.

Sebago Cabin Camps is 30 miles from the George Washington Bridge, 45 or 50 from our house. Peggy checks in and our adventure starts as we drive slowly around and around looking for A-8. I insist we don’t need to get out the map, there are only 20 cabins, and soon enough we find ours. It has a porch, a two-burner hotplate, a refrigerator, and three bedrooms. I choose the one with the desk (more like a vanity). I push the two cots together and the bed (I also brought sheets and pillows—everyone else, it turns out, has brought sleeping bags). We open some wine and congratulate ourselves on our intrepidity. We also wonder where Johnny et al are.

I brought Words for the Wild: The Sierra Club Trailside Reader, which I display on a ledge. To me this is the coup of the trip, at least in terms of atmosphere, but Marion has brought five loaves of really good bread.

It’s raining. Occasionally it appears to be clearing up, but that’s relative.

After a while the ranger drives up with a note: John Stanton is stuck in Tompkin’s Cove.

I look on the map—that’s only five or 10 miles from here. Joe and I go over to rescue them, although by the time I get there, the car is more or less fixed. It’s somethng electrical and they assure themselves it’s OK by switching batteries with my car. Johnny is relieved that it only cost $20. Instead of treating us like heroes and saviors, they’re annoyed that we didn’t wait up for them along the Palisades Parkway.

While waiting for help they ate roast beef sandwiches and drank hot chocolate, while we worried ourselves sick, so I really can’t see how they have any business complaining. Eddie and Johnny (claim they) ran two miles to a garage in the rain. “We kept coming to all these houses and we thought there’d be a town but it was always more houses, “ reported Eddie.

We went home (getting mildly lost as I knew a shortcut) then Peggy, Marion and I went shopping. I was part of the “we” only as driver & was not allowed to choose anything, even cheesy snacks. We spent $120 on bagel chips, corn on the cob, milk, ice cream, prefab smores that we later “toasted” over a hotplate, apples, tomatoes, red peppers (“I always buy a red pepper when I go shopping,” Iaadvised helpfully). Dinner miraculously appeared soon after we got back: steak, potatoes sautéed in garlic, fresh veggies, wine. We ate outside even though it was still raining—not enough to go in but enough to huddle and feel silly. Eddie and Joe ate inside, but they didn’t have to guard the wine. The picnic tablewas so deeply askew that once you sat down it was a cripple’s vacation to get up again.

After dinner we played a stupid game called Scategories. Johnny read his book on the Civil War but everyone else play. I lost even though it’s very easy to cheat.

We walked to the meadow, trying (and failing) to get Joe to buy the legend of the headless woman. He is a lot less credulous than last year, when he believed I was taller and weighed more than André the Giant.

Doug told a long story in fact two that I missed the point of, involving mistaken identity, some rare owl, and Gerald Durrell, author of My Family and Other Animals.

It’s not raining but it’s cold.


I got up first and made coffee. Johnny got up second and had coffee. I was sitting on the porch steps wrapped in a blanket when Johnny came out and said, I woke up because I missed you.

It’s stopped raining and has switched to being cold and windy and cold. Also sunny and tree-y.

Joe got up in time to go to town with us for breakfast, which was pancakes and French toast in Tuxedo or Sloatsburg—I can’t figure out where one leaves off and the other starts—in a restaurant with an orange roof. Pancakes are just flour so why do I always imagine they’ll be delicious? Johnny drank my coffee so I can’t report whether it was as weak as it looked. He also paid so I can’t tell you what breakfast cost. We bought the Daily News—I was mildly amazed that it was sold there, as though being in the country puts us a thousand miles from a newspaper.

When we got back, everyone was up and told us we were bad campers but I think they were jealous that we’d been warm for an hour. They wouldn’t let us eat any bacon. It’s so cold I can’t smell it.


Doug: Alice is the only person who taps me for her birthday on my birthday.
Elinor: At least the rain & cold keep the bugs away.

Then Doug, Alice and I went for the traditional walk along the lake.

Last year it was hot and J and I stayed behind and made whoopie. We were very proud of ourselves, as the beds are squeaky and the neighbors near, so one one ever does it. It’s a famous camping secret in The Brave Little Poets Go Camping 1989.

We saw tiny colorful flowers and named them, accurately and not. We saw catbirds, a black and rust-brown cigar caterpiller, and a spotted salamander the red-orange of a just-ripe red pepper. It hid under a leaf and we stood around and watched it. Its skin was smooth and the color unlikely.

Should I pick it up?

A raccoon came right up to the picnic table last night during dinner.

Oh, said Peggy, I thought your shriek was part of the dialogue.

Later it walked right into the cabin.

While we walked, Peggy swam. No witnesses, so a small doubt remains in the minds of those too frozen to hold a pen. We suspect she took her suit down to the lake & dunked that. She says a fat lady and a Spanish man saw her, but they are nowhere about.

We grilled hamburgers and then, because Johnny couldn’t drive with his lights on and because we were out of wine, we left at 5. Sleepy.