"Underwater and over the limit" 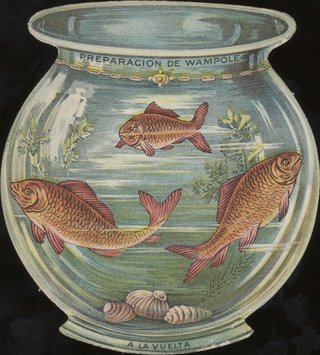 I heart fish.
Fish can make alcohol to replace oxygen if need be, according to a short piece recently in The Economist. They have spare proteins that are activated by low oxygen levels into "what might be thought of as a cellular distillery... Blood-alcohol concentrations of crucian carp in icy ponds can surpass 50mg/100mL—above the drink-drive limit in some countries." But is that fun for them?

Long ago I read and loved (& still have) a book about fish, written in that fable-like way natural history writers once employed (I'm looking at you, W.H. Hudson): The Life Story of the Fish: His manners and morals, by Brian Curtis (written in 1938). How do fish sleep with their eyes open? was one question. How do we sleep with our ears open? the author asked in return.

It's been years since I've looked at that book but I went directly to the paragraph I remembered: "If we can sleep in spite of the messages which our ears are continually sending in to headquarters—and which, in a large city, are neither few nor faint—why cannot a fish sleep in spite of the messages which its eyes send in." This is not a children's book, & Brian Curtis was formerly Supervising Fisheries Biologist, California State Division of Fish and Game.

I think it was Kipling's story about the white seal that gave me vivid dreams as a small child about being a fish & swimming in the cold dark sea. I haven't eaten fish since. When I go to an aquarium, I can hold my head up & look them in the eye. I don't eat you! More an affinity than a moral stance.
Be the first to comment
Loading…}