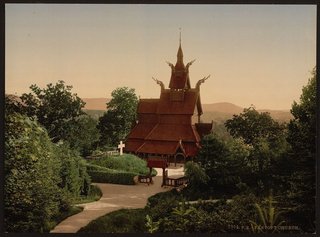 I did study some Old English not long ago. It was hard—there wasn’t a lot of English in it plus it had those eths & thorns & other characters, and not too many words I recognized. Unlike Middle English, which is pretty easy once you get rolling. After a page or 2 of Chaucer you forget it’s not your language because it is our language.

Much as I love seeing Latin in the Romance languages and hence in English, I am much more excited to see the Anglo-Saxon connections to Norwegian. I love knowing that a thousand years ago people were saying “house & home” (hus og hjem)—& probably it was moder und faeder (mor og far) criticizing their bairns (barn) for eating them out of it.

For years Johnny & I wanted to read Chaucer as our summer book but I wanted to read him in M.E. & J in modern. Finally last summer we thought of the (obvious!) solution: instead of sharing a book, he would read his & I mine. It worked great, except he always complained that I was reading in a Swedish-y singsong (remember, I’m from South Dakota, & it’s our accent). Then one day he was listening to the linguist John McWhorter talk about Chaucer, when McWhorter abruptly stopped & said, huh! this sounds Swedish, doesn’t it. Now it makes sense: Old English, Swedish, Norsk….
Be the first to comment
Loading…}