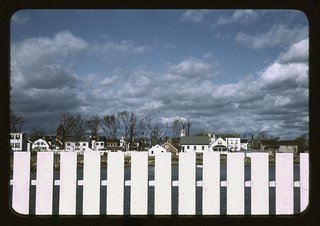 Stonington, Connecticut.
Every once in a while I think how nice it would be to be somewhere else. Sea breeze... charming houses... really good tomatoes, hot off the vine. A couple of years ago I took the ferry & train to Tottenville, Staten Island, which is the farthest point you can go from Times Square and still be in New York City. I had read a book called Last Train to Tottenville, although I half-think it was set in Tasmania. No, that must have been Voyage to Tasmania. In any event, no such book as Last Train to Tottenville seems to exist. There is a 1971 book by Hope Campbell called No More Trains to Tottenville, with this description: "When Jane's mother abruptly disappears into an Indian ashram, Jane seeks solace on the Tottenville train, discovering a bar with a jukebox that plays songs from World War II and a young man names Scorpio who introduces her to cognac and Sinatra." Which doesn't sound right at all.

Anyway, I expected to discover that Tottenville was a cute little seaside town where I could buy a tiny seagully cottage for no money, like Dorothy Day or Alice Adams. It was actually rather scary, where I felt all the curtains twitch as a stranger ambled by, and the only place to buy a snack sold salami sandwiches & that was about it.

I've done this a lot, go to places with a literary provenance, such as the town in Mexico where Under the Volcano was set. It has never gone well.
Be the first to comment
Loading…}