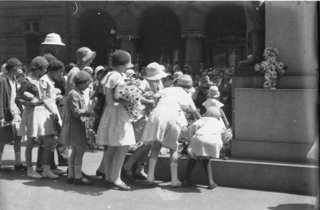 The Times has a terrific obit of Winton.
Several years ago I saw a documentary called The Power of Good, about Nicholas Winton, a man who saved hundreds of Czechoslovakian children right before World War II, and never said anything about it till his wife found a scrapbook in the attic 50 years later.

As I recall, he didn't talk about it because felt like he had failed—the last train out was stopped, on September 1, 1939, when the war started, and all of the 250 children aboard were never heard of again.

In the documentary, they showed him on a "this is your life"–type show on English TV, where the rest of the guests were the children he'd saved and their descendants, who now number 6,000, and include scientists, artists, tech wizards, and of course many more. His look as it dawned on him, 60 years later, the results of his action & the gratitude of these survivors, makes you want to have a positive effect like his.

what a wonderful man--a true hero.