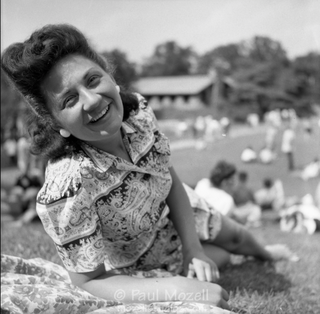 Bina in her 20s, at her first meeting with the man she would marry. Her smile only got more radiant as she got older. Photo by Al Mozell, © Paul Mozell.
So sad to say goodbye today to Bina Mozell, a founding member of my synagogue, who passed away on Saturday at age 93. The people who spoke at her funeral, including her 2 sons, told the same stories I would have: her beaming love, her interest in people, her joy—in her husband, Al, in nature, music, dance, & anything that crossed her path.

Bina was an inveterate bicyclist, although an inattentive one, who often fell off because she was looking around at all the world. She saw me at Al's funeral 6 years ago with my bike helmet, & said, with the enthusiasm that pervaded her every utterance, "Oh darling! You came on your bike!" She forgot her sorrow for a moment in her joy, in how perfect it was that I ridden there that day.

When I had my adult bat mitzvah 12 years ago, people came from near & far, from every corner of my life. But it was Bina I wanted there, Bina I needed to make eye contact with so I could go on. The rabbi said something similar. There she'd be, wriggling with excitement, never taking her big eyes & joyous smile off you. Wow, I must be really good!

She had her low moments. When Al was creeping away into Alzheimer's, she once said rather bitterly that he had never cared for her. I said, "Bina! Look!" In every single photo of the 2 of them, she is facing the camera with her usual look of delight, and he is looking at her with so much love that no one could see it without hoping someone would ever look at them like that even once. Every single photo.

Bina, your memory will be a blessing. It was an honor to catch your rays.
Be the first to comment
Loading…}