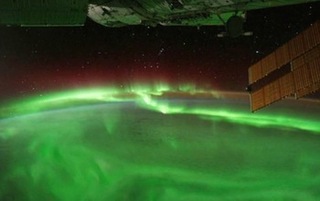 St. Patrick's Day 2015. Photo: NASA.
How cool that we got a green light show to celebrate St Paddy's Day! (I know I'm a little late with this.) And when was the last time there was an Irish pope? Never. There has never been an Irish pope. I guess this gorgeous sky was to make up for that. What colors are as deeply connected to a country as green with Ireland? Blue with ...? Orange with ... the Netherlands but I don't think people in general feel strongly about Holland. Red, white & blue with several countries but a color scheme isn't the same as a color. And no one ever says "she has the map of Poland [or Minnesota, or Ghana, or Ecuador] on her face." Only Ireland gets plastered on that fair freckled phiz. But! It doesn't in fact mean freckled, according to this website on Irish culture:

Phrase: He has the map of Ireland on his face
Irish: Tá cuma créigeach ar a aghaidh
Pronunciation: thaw kumah kray-gi-okh err ah eye
Note: Not a literal translation but "He has a craggy face." The colloquialism "map of Ireland on his face" applies only to a man and implies that the person's face is like the geographic features of the country. Our native Irish speaker says she hasn't heard the phrase in years.
—from www.irishcultureandcustoms.com/3Focloir/PersonalAppearnce.html

Is that the map of Ireland on Aurora's face? Who looks Irish, anyway? Tip O'Neill? F. Scott Fitzgerald? Maureen O'Hara?
Be the first to comment
Loading…}