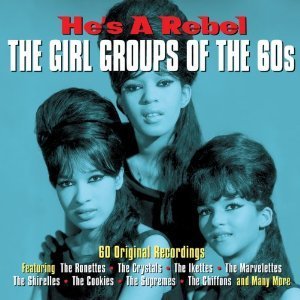 The 1960s were full of girl singers: The Dixie Cups ("Chapel of Love"), the Crystals ("And Then He Kissed Me"), Shangri Las (Leader of the Pack), Vandellas, Chiffons, Shirelles. Most of them black & oh-so-stylish. The smoothest harmonies this side of Jeter & Cano.

Were they political? Not overtly, for the most part, at least not in their songs. When it was picked up in 1968 as a civil rights anthem, Martha Reeves explicitly said "Dancing in the Streets" wasn't a plug for revolution: "My Lord, it was a party song!" (Berry Gordy Jr. was well-known for being careful not to connect Motown Records to anything that might interfere with business.)

And the current "feminist" gangs who think that the worst thing in poetry is "sexual harassment"? Unlike the Supremes & Ronettes, they don't dress well & they have no talent. They are lefty teaparty nitwits, who think the world should be the way they want because they can outbark people who can see nuance. Also, their targets seem to be largely black writers, while claiming that they themselves are "of color." They dredge through emails & questionable situations to find examples of "unwanted flirting." They name names.

Are there genuine issues that could & should be addressed? Sure. But to blame an institution for alleged activities by people loosely affiliated with that institution is ridiculous. To mock every attempt at conversation or response means you are only interested in self-aggrandizing destruction. To attempt to shame or shout down anyone who disagrees with you destroys your arguments. Grow up, brats.
Be the first to comment
Loading…}